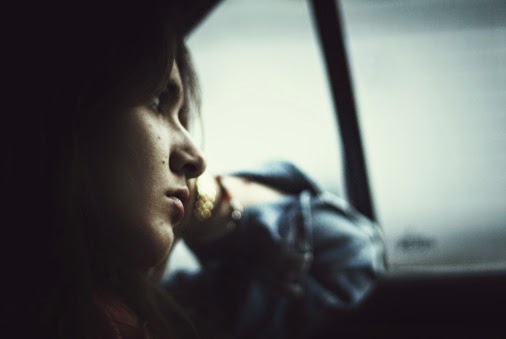 The car rolled to a stop at the traffic lights.

I am seated inside, in the backseat of the X Trail. I leaned my head against the window, its cool veneer a small respite for my tired head.

Traffic conditions in Jakarta is rarely described as favourable at the best of times. With more motorised vehicles in Indonesia’s capital and its surrounding cities than there are people in Malaysia, this is not entirely unexpected, though it remains an unwelcome experience for many, and even less so at the end of a long day.

My driver picked up his smartphone, using the present inertia to send a message to his wife. He married recently, and a stabler personal life has led to a slight change in attitude, for better or for worse.

Near the traffic lights, an old woman, cradling a young child in her arms, ambled from car to car. The woman could have been old enough to be a grandmother, though her sickly body frame betrayed the lack of a sustained and proper nourishment, so it's difficult to tell.

The child, at the other end of the spectrum of life, appears to be similarly undernourished. For now, he followed the flow, limbs limping lifelessly so as to evoke enough sympathy. Ideally, this process will end with the parting of Indonesian rupiah through the lowered window of an import car.

She came over to my car, and looked through the window. When my driver ignored her, she moved on to me, and for the first time, our eyes locked on each other. A smidgen of hope crystalised in her eyes; gaining attention of those willing to not ignore them is the first step of a proper meal in the day. The child, I realised, could not be more than a few years old. Yet even the most basic of proper clothing is lacking. His shirt must have been a few days old, and I do not wish to speculate on the diapers, a commodity already pricey enough as it is.

I looked at her and the child. In truth, this could not have lasted more than a few seconds. Those seconds, however, stretched on for a lot longer. Time didn’t really stop, and neither did it transitioned into slow motion. It did, however, made me feel hot under my collar. The coolness of the window lost out to the heat from my body. I swallowed, feeling somewhat uncomfortable with the situation, then raised my hands together, the palms enjoined in a gesture to indicate that, for now at least, there is no dice to be rolled here.

This is Jakarta, a city where the divide between the rich and the poor is almost non-existent at times. Drive around often enough, and you’ll notice the need for money has people doing many things. Some can be more creative than others, as the selling of newspapers, playing of guitars and controlling of traffic flow can testify. Others, like that old lady and the young child, are less so, with their outstretched arms the only tool for garnering food.

Charity, then, is the key here. It is an unwritten rule, an obligation many have answered. Tipping, for example, is incredibly prevalent here. However, coarse situations like these are incredibly uncomfortable existences for me to witness; as I survey the world outside into the life of the less privileged, I lament ever more the cruel lottery of birth. For so many people, theirs is a life for whom the numbers never came up.

Abject poverty, at its most hardcore, is something to be swept under the carpet or thrown out of the city, without many giving much thought to how lucky we are to be on this side of the window.

I can understand the desire of the Federal Territories Minister, Tengku Adnan Tengku Mansor, who recently threatened to shut down the soup kitchens serving the less privileged in Malaysia's capital. His wish is to rid Kuala Lumpur of its homeless from its most marketable areas. To a segment of society, their presence is a hindrance for personal comfort and professional growth, and going after those who take care of them is a way of nipping it in the bud, so to speak.

Nevertheless, that approach of trying improve the city’s image betrays the heartlessness that is indicative of one thing: forgetting where we come from. Our lives have been segmented from its very start, and it has been a combination of (ir)regular happenstance as well as planned executions of long-held ambitions, particularly by our parents.

All the same, the point remains that we cannot forget where we come from, and perhaps more pertinently, where we could have come from. This lack of empathy is from a leader of some renown and position is worrying, but I am not overly concerned. Malaysia and Malaysians are hardened souls who will survive and prevail, and if anything, Tengku Adnan’s comments have rallied many to give this issue more than just a passing thought.

As for Jakarta, in some ways it is an even tougher city, an environment that is not afraid to look at itself in the mirror. It cherishes and admires its scars, wearing them loud and proud. Look at me, it says. I am here, says the boy strumming his guitar for a few more rupiah. Remember me, says the woman in the street cradling her child as she moves from one car to the next. Be uncomfortable, for I exist.

The light turned green, and eventually we all moved on.
Labels: class indonesia jakarta kuala lumpur malaysia tengku adnan the other side