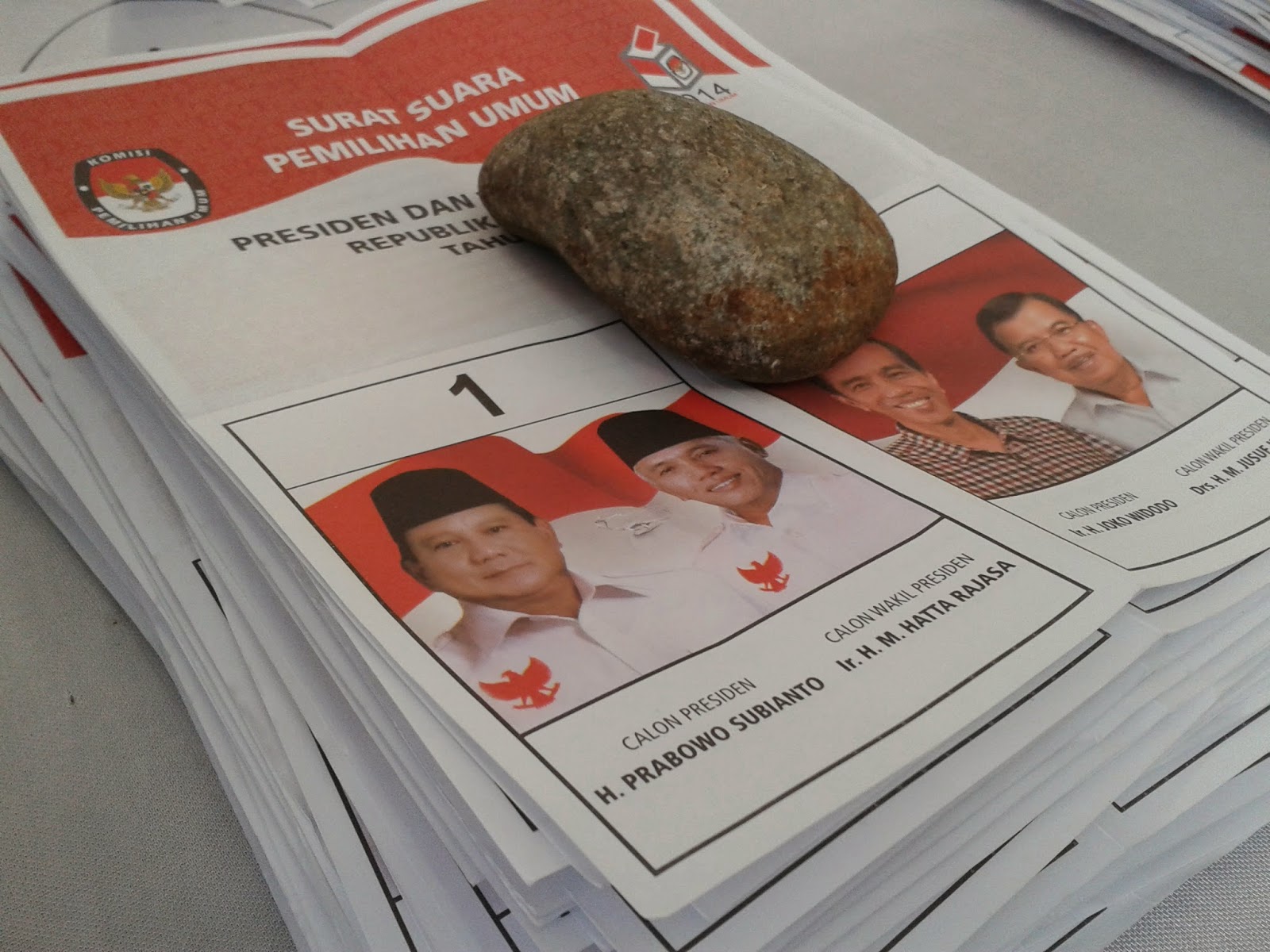 The voice came from the nearby mosque, reverberating around the neighbourhood. I was busy doing some marking at home, thinking about the appropriate penalties to apply for those who did not follow the proper guidelines. As far as I am concerned, my classes are quite simple: follow the basic script guidelines, and it's difficult to lose marks. I'm a 'no such thing as one single right' kind of lecturer, so you really have to try to fail in my class. Previously, I had a more laissez faire approach in this regard, but this time I wasn't in the mood for leniency.

To my ears, they became louder. To everyone else's, they were certainly becoming more frequent. Only the numbers one and two were mentioned, one after the other without any particular pattern. Repeated after a certain pause, the word 'sah' made me wonder what (else) is going on that day.

It was the 9th of July, 2014. On this day, Indonesians all over the country (and in large parts of the world) went to the polls to vote for their new president. In my area, that was done and dusted around noon. The voice, as it turns out, was the very public counting of each and every single vote.

I stopped marking and went out, walking the short distance to the mosque. I had thought that it came from the mosque itself, but it turns out the polling station was situated on the tennis court adjacent to it.

A small crowd had gathered. There can't have been more than forty people there, give or take a few incoming and outgoing stragglers every once in a while. I am one of them, intrigued by this process. It was a lovely day, unusually cooler by Jakarta standards. Small children loitered around, playing tag on the court. At one end, a small blue tent had been set up, where the raison d'etre of today is being executed.

The man who said that is merely repeating what he sees in front of him. From a box, an official from the elections commission picked out each voting slip, and held it in the announcer's face. Behind him, another official counted the votes, marking each on accordingly on the notice board. The form on the board is known as the C1 form. Apparently it is a new addition for this year's elections. The numbers announced were in reference to the candidate in question.

“Dua, sah.” Each one in favour for Joko Widodo is another blow for Prabowo Subianto. Joko Widodo is the governor of Jakarta, making a run for the throne due as much to his insane popularity as it is to his own ambitions. The same can't be said for Prabowo, whose military background and less-than-perfect human rights records have not endeared him to everyone. Nevertheless, that race has been predicted to be closer than it probably should, so every little counts.

The man at the board marked for Jokowi. Each five marks would be crossed out, making it easier to count. There are several lines available for both candidates, and each full line indicates exactly seventy five votes.

“Dua…” the announcer started, then caught himself. The crowd murmured their excitement. There is a small hole near the corner of one of the voting slip. “Nggak sah!” someone exclaimed, though his tone and the crowd’s reception to his comment suggested they get the joke. The election officers, though, were less jovial, and took a closer look. Eventually, they accepted it, for the discrepancy is not big enough to render it void. 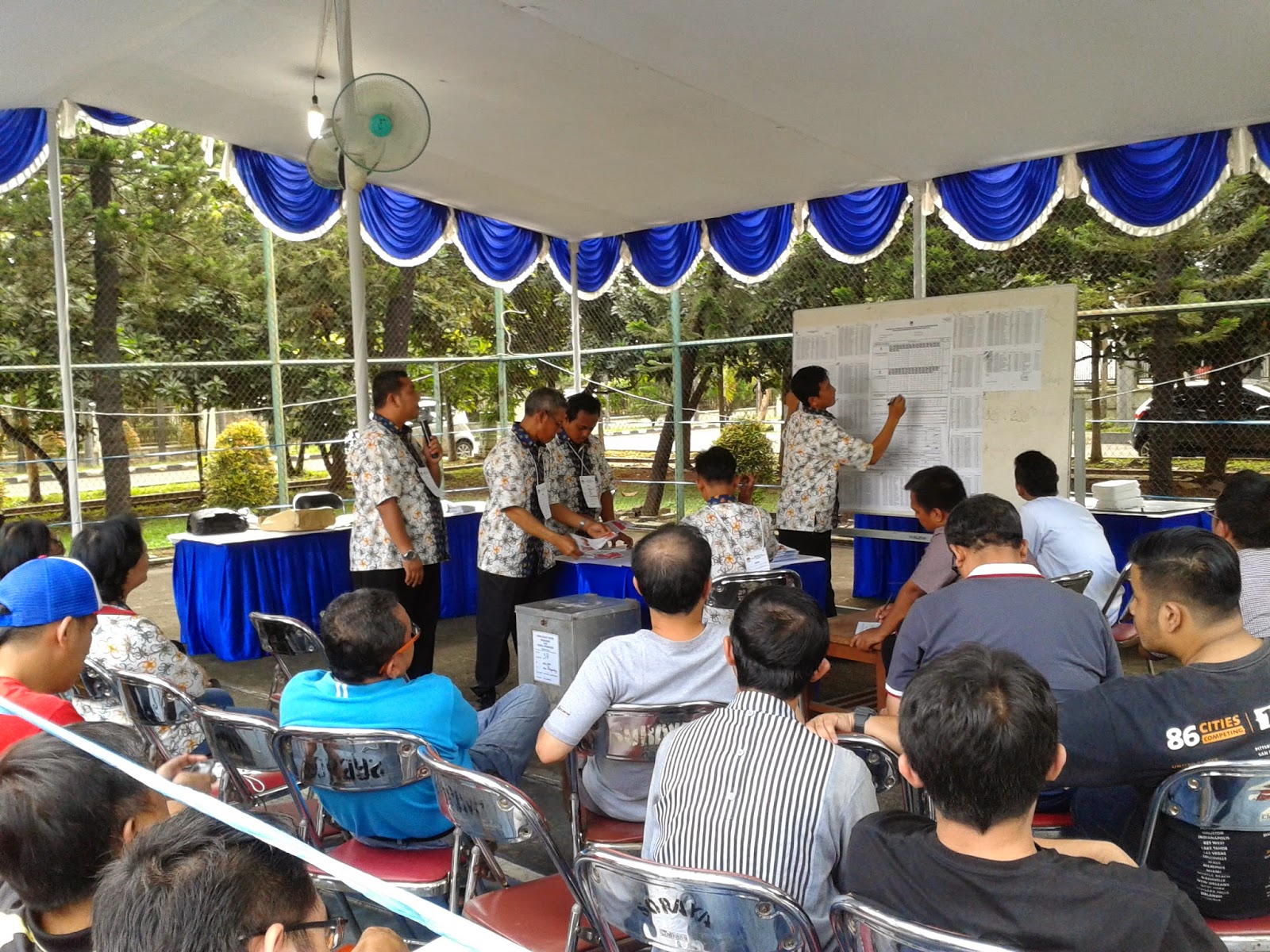 Someone once said that justice must not only be done, it must also be seen to be done. Here, the transparency helps to build a certain sense of trust, one that is important in ensuring the acceptance of whatever comes.

I wondered about the possibility of such a system in Malaysia. Of course, the vastly different contexts and systems in place renders a direct comparison difficult, but this is certainly an idea worth considering. It's human to err, but in all the elections I've been aware enough to follow, there's always a sense that the room for improvement is vast, yet not insurmountable. Not unlike justice itself, national institutions need an aura of perfection to properly function.

A stronger shout rang through the air, cutting short my train of thought. This time, another voting slip is contested, and with good reason: it had a huge hole in it. From my position, I can only see the back of official form itself, rather than what the voter had indicated, but the huge hole in the middle did make me wonder what on earth happened in the voting booth. You could have placed a fist through it, and the officer had no choice but to put that vote aside, its voice discounted.

The choosing of their president takes place once every five years. Around two years beforehand, the election commission will sit down and decide on the improvements to be made to the system, as well as the date for the voting to take place itself. It is a system that is continuously under review. Again, a perfect comparison this is not, but surely something more fixed is preferable to the prime minister playing poker with our futures.

There are, however, caveats to be considered. This is a fairly small constituency, with around five hundred people on the list. By the end of the count, only four hundred had bothered to turn up; the failure of a fifth of the residents to vote is fairly sizeable, in my opinion. The point is, it is easier to read out five hundred votes than five thousand.

Furthermore, this is considered to be a leafy suburb, filled with people from the middle to upper class with a more measured approach in life. I know that sounds weird, but the fact is other areas may bear witness to more overt and aggressive displays of political bravado. In the past, they have led to violence, so I am not sure whether this approach was adopted elsewhere. Of course, I have not even begun to consider the other ways in which this election could be rigged or hijacked.

At the end of the day, Jokowi won my constituency by a fairly large margin. Everyone shook hands with all the officials and security officers. I did the same, and as I made my way home, I am left encouraged by the process.