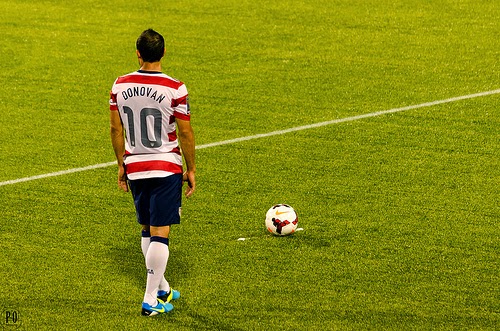 In announcing the 23-man roster for the 2014 World Cup in Brazil, USA coach Jurgen Klinsmann has seen fit to select players he think will do the business down in South America. That is his right, and it has been since 2011. His approach has been revolutionary in nature, and his search for the right players for the World Cup has uprooted plenty of trees everywhere.

However, I did not think it would extend to the uprooting of one of the mainstays of the national team over the past decade or so, Landon Donovan.

Though I may not necessarily be classified as a hardcore follower of football in America (the foot-with-the-ball kind), my interest in the league has steadily increased over a number of years. The efforts taken to establish new teams, traditions and players were very interesting to note on a critical level, and comparisons to other sports and franchises within the very saturated American sports context is an eye-opener worth analysing.

It helps that the presence of a number of players such as David Beckham, Thierry Henry and Rafael Marquez has been migrating there. The United States have a great tradition of exporting players overseas with great success, but recently, the bigger news have been the homecomings of established American names such as Michael Bradley and Clint Dempsey, amongst others. More interesting on an imagined-communities level has been the integration of semi-Americans such as Mix Diskerud and Julian Green (more on him later).

However, the main constant used as an equaliser for all these players and teams have been one man and one man only: Landon Donovan.

An attacking player of great quality and courage, he has largely settled at Los Angeles Galaxy for nearly ten years. It has not always been smooth sailing for Donovan, and to the larger audience, he is probably more known for his supposed failures as much as anything else.

He actually started his career in Germany with Bayer Leverkusen, but though he were to have two bites of the German cherry with both Bayer and Bayern Munich (the latter an opportunity granted through the then-Bayern coach, Jurgen Klinsmann), he didn’t quite manage to settle. Further stints in the Major League Soccer (MLS) with San Jose Earthquakes and Los Angeles Galaxy allowed him to flower in more favourable surroundings.

However, the bottom line on his actual level of consistent of performance as a player remains murky, given that MLS, then and now, is not considered by many as the benchmark of high quality football. That’s a bit of a misnomer, given the great strides the league has made over the years, but a hint of that accusation remains true. For my part, Donovan proved that he has the quality to perform after two loan stints with Everton, as well as more than matching David Beckham during his stay in Los Angeles.

Of course, that was some years ago. What of the present? The situation is that Jurgen Klinsman is taking with him attackers such as Jozy Altidore, Dempsey, Aron Johannsson and Chris Wondolowski. They are players of great quality in different ways. Many observers may be swayed by Altidore’s lack of goals in the Premier League, but a year playing in England’s top flight is not to be sniffed at when it comes to toughening players up.

Johannsson and Wondowlowski’s great form in the Dutch and American leagues are good to rely on, while no complaints can be made about Clint Dempsey; Donovan might not have signed permanently with a European team since 2005, but Clint just can’t help himself, even signing back for Fulham on loan near the end of this season after returning to America at the tail end of last year. In this, I think it is probably Donovan’s break from the sport for four months recently that took its toll. Given that he is 31 years old now, his tournament-saving goal against Algeria in 2010 may well have been his swansong on the world stage.

Instead of the United States record goalscorer (Donovan has scored over fifty goals for the men's national team), Klinsmann has opted to take in his squad the appropriately-named novice, Julian Green of Bayern Munich. Highly thought of in Bavaria, his inclusion is probably a kind of insurance for the future, given that he has yet to make a competitive appearance for the Americans.

In place of the face of American football, then, Klinsmann has picked a player, however prodigiously talented, with only five minutes of top flight first team football in his professional career thus far. Theo Walcott’s selection for England in the 2006 World Cup was even more extreme (no senior appearances for Arsenal at the time), though the argument could be made that experiences such as his and Ronaldo’s at the 1994 World Cup have played decisive parts in their careers since then.

Nevertheless, this risk-taking has built a bit of a rod for his back. Klinsmann has taken as big a risk as any, sacrificing the past for the present in his bid to secure the future, in the Group of Death against Germany, Portugal and Ghana.

For the sake of all three men and the team, I hope he is successful.
Labels: football julian green jurgen klinsmann landon donovan usa world cup