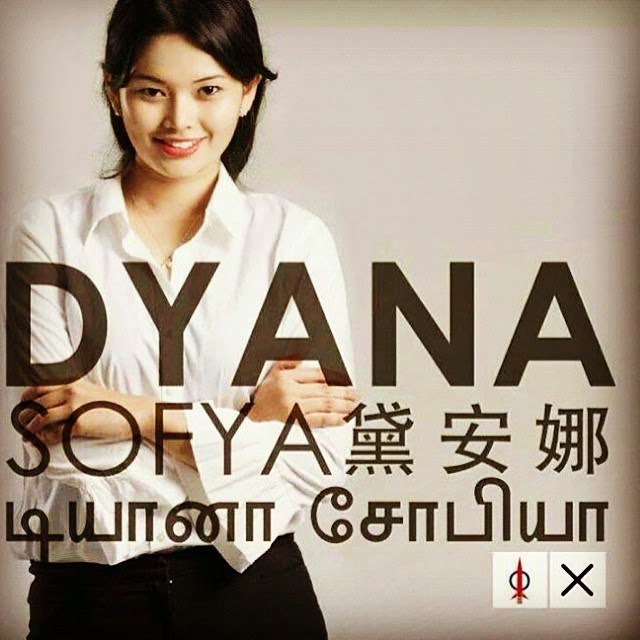 With her fresh appearance, good looks and a fairly strong background, Dyana Sofya has appeared almost from nowhere to become a catalyst for a kind of change in Malaysian politics.

What kind of change, though? I am currently reading a book, El Clasico, by Richard Fitzpatrick, detailing the rivalry between Real Madrid and Barcelona. This is a rivalry that has run for centuries, and one of the chapters is entitled 'Change is good…if it is for the better'.

It’s an obvious quote, and the fact that it appears in a football book renders it even less likely it will go down in history as one of its more significant remembrances. However, just because it is so obvious doesn’t make it any less true.

Previously, I had interacted with Dyana on Twitter. At the time, I was handling the Twitter account for my department, @WritingFiTA. This must have been around the 2013 Confederations Cup in Brazil. That tournament is usually held as a dry run for the World Cup proper, and it is, if you like, a closer examination of the host's capabilities of running an international-level tournament.

I guess they should also include, “the host’s ability to control its own people.” For it was during that tournament that there were huge public outcries against the Brazilian government. Disappointed that the promises of improvements in public infrastructure, amongst other things, to be brought about by the World Cup were not followed through, many Brazilians took to the streets to express their anger. I strongly recommend the work of Fernando Duarte, a Brazilian sports journalist whose articles provide more context on this.

It was the expression of these sentiments that Dyana made a point to mention. I believe at the time, she was handling the Twitter account for @Twt_UiTM, which I had followed, and through my faculty’s handle I made a point of countering hers. I rarely do this through my own handle; I decided long ago that I had wanted to maintain my personal handle for: a) professional purposes, and far more importantly, b) lame jokes.

Anyways, the point Dyana was making was of the bravery and courage of the Brazilians to rise against supposed tyranny and let the world know of their grievances, and how we as Malaysians have not done the same thing. I saw her point, especially with regards to the improvement of infrastructure for the public, such as transportation, but figured that a fairer comparison could have been made with more equal contexts in mind.

She mentioned of how many millions of ringgit had been wasted in a number of projects. In this case, I think a better side-by-side analysis would be the last time Malaysia hosted a proper international sporting event. As I recall, the 1998 Commonwealth Games is the closest example I can think of at the time. Further reflection reminded me that we also hosted the World Youth Cup in 1997, during which time the likes of David Trezeguet, Juan Roman Riquelme and…err, Damien Duff graced us with their presence and skills, even early on in their nascent careers.

Coming back to the point, the infrastructure whose progress was fast-tracked because of the Games included the building of a new national stadium and new modes of public transportation. A part of this was the Putra and Star LRT systems.

I have to admit, by this stage I wasn’t in the country much, so I was not able to judge the kinds of teething problems I am sure they faced when these projects were first implemented. By the time I came back for a holiday, all these things (including the Twin Towers, interestingly enough; was it built with the Games as a part of its objective too?) were just…there.

I can only judge it by what I saw, though. What I saw and still continue to see is…the infrastructure we had put in place specifically for the 1998 Commonwealth Games is still around in one form or another. As such, in this kind of comparison, I do believe that the government and its partners at the time as a whole does not look all that bad.

She didn’t agree with this method of assessment, though, which is her right. The mini tete-a-tete petered out as quickly as it had started, with both sides making its point and no one really interested in budging from their original position.

Anyways, that’s a pretty massive tangent to take to get to this point. Over the past few days, since she was confirmed as a political candidate of the Democratic Action Party (DAP), the amount of attention showered on her has been monumental. I regard myself as a political observer on the fringes, but I can’t recall this kind of attention being paid towards a newcomer to the Malaysian political scene. Feel free to correct me here.

Some have been quite complimentary, but others have been busy running their mouths and running her down before she has even started to jog in this race. The kinds of attack have been deplorable at times, with people chastising her mother for raising her to be who she is (if that's the case, I pity those whose parents would prioritse the United Malays National Organisation [UMNO] over them).

Others, even with better intentions in mind, have failed to look beyond her good looks. Yes, she is aesthetically pleasing on the eye, but come on, people! She's not the only one in the whole country. Quite frankly, you’d think that many of them have never seen a beautiful young lady before.

Far less surprisingly has been the involvement of the race factor. I said it’s not surprisingly, but I am still disappointed. Analysts have suggested that her race decided it for DAP, a group claiming to be multi-racial but still somewhat superficially dominated by members identifying themselves to be of some ethnic minority; as a part of a bid to portray a more multi image, Dyana has been selected to lead their charge in Teluk Intan.

Whether all these things are true or not, on a personal level this is my biggest fear: that a young, ambitious, qualified and capable Malaysian is being seen as anything but.

We know plenty of capable people in our personal and professional lives. I know quite a fair number who do plenty of good work both within and without government institutions. More to the point, I also know of plenty more people who can’t wait to leave the country. They have their reasons for doing so, but while I do not wish to knock them, it is these very people who have a bigger chance of doing something to change the nation should they wish to get involved.

Instead, they…don’t. They look further afield, to Australia, England and the United States. Nowadays, I gather the Republic of Korea is growing as a destination of choice for many Malaysians, too. Year by year, I see more and more people looking for little more than to escape the Malaysian and/or the government (i.e. they may stay in Malaysia, but working in the government? Probably not).

There are reasons that pull them away to other places, but it's more disappointing to see them acknowledge factors that pushes them away from Malaysia. Sometimes, it is a bit of a camouflage game going on (claiming to be sick of Malaysian politics while probably secretly desiring a life where they can make more money and not have to worry about khalwat, for example).

All this and other reasons and factors are to be considered as well, but the end result is that the kind of change we often talk about does not come as quickly and in the same way we want it to. With regards to power, we can debate whether it is given or taken. What seems certain is that those who are in power stay in power or become more powerful simply because others who could have challenged them in whatever way they can...decided they don’t want to.

Here, then, is another fact, and the only one that truly matters: Dyana Sofya is a young Malaysian who is capable of helping along this change many of us wish to see. Whether you agree with her or not, how many of us is capable of looking at her and seeing only and exactly that? Without taking into consideration her race, religion, alma mater, gender and other such genres?

The question then is probably not whether Dyana is ready to enter the dog eat dog world of Malaysian politics. I suppose the bigger question is whether we as Malaysians are ready to accept her as such.
Labels: dyana sofya fikri jermadi politics