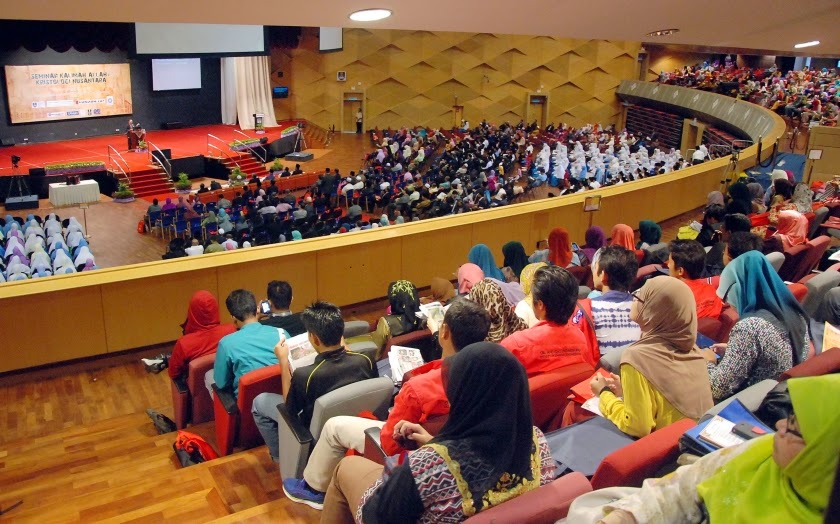 Over the past few weeks, Universiti Teknologi MARA (UiTM) have been getting a lot of bad press about a seminar held with regards to religion. To be more specific, it featured a number of people from Indonesia who had converted into Islam, and were seen preaching much of the same message to the masses in attendance.

Being a UiTM lecturer myself, I figured there might have been some sort of memo about being present for the seminar, but I didn’t notice anything, so I never went. I got wind of it through social media, as my friends online went to town with regards to what happened. Based on what I have read and heard, truth be told I didn’t really have a problem with their reactions per se, given that they probably felt most affected by this seminar. I can’t really replicate their perspectives unto my own, so to each their own.

However, I do feel that to conflate the opinions of those who spoke at the seminar as a position that is also held by the university as a whole seems ridiculous. Whatever their perspectives maybe, they were opinions and feelings formed from being born and bred in discourses and contexts different to ours. How applicable is it to the Malaysian discussion? Yes, you may say that Islam is one and all, but the reality is we understand this very same thing in very different ways. On a more personal level, I don’t agree with them, but then again, I wasn’t born in Indonesia, where ideas in relation to religion are formulated in very different ways.

However, is the facilitation of space for discussion necessarily the same as an official endorsement of those involved? One event, organised by one part of the huge organisation that is the biggest university in Malaysia, is rather difficult to be taken as being representative of said organisation.

According to an official-enough source on the web, the speakers include Haji SM Masud (a Christianity-Islam comparative religion expert), Hajjah Irena Handono (former Roman Catholic nun), Haji Insan LS Mokoginta (former Roman Catholic Christian), Professor Dr Menehim Ali (Christology expert from the University of Bandung) and Haji Abdul Karim Omar (secretary general of Pertubuhan Muafakat Sejahtera Masyarakat Malaysia). I write their names here because they are the ones who expressed their opinions at the event as invited speakers, and they are the ones who...were very rarely quoted by pretty much everyone.

Here's a tangent. Monash University, a jewel in the crown of many of the middle class Chinese Christians (as UiTM is to the Malays, I suppose) who are very happy to expose their children to a more international education, have invited our prime minister on more than one occasion. Hell, him being granted an honorary doctorate is probably an even bigger and even more official endorsement of the man himself. To a certain extent, certain parties and groups of students are not particularly happy about that, which is fair enough. At the same time, though, the opinions and ideas expressed by the prime minister himself was never accepted as being the official position adopted by the university. It was seen as many things to many people, but the conflation of their official positions was not one of them.

I served Monash University itself for quite a number of years as the filmmaker in residence, and I have conducted a number of workshops and seminars about films and filmmaking at the university itself. In particular, the Monash Independent Film and Education Symposium featured Nadiah Hamzah, Woo Ming Jin and Amir Muhammad, filmmakers whose ideas constantly challenge the accepted ideal in a number of different ways. At my current faculty, until recently I was in charge of organising seminars related to the creative writing programme. I’ve invited people ranging from Nik Amir Mustapha to Shuhaimi Baba. Their ideas was not accepted by many in attendance as a reflection of the faculty or the university’s own position.

So why now, and why this? Some would point to the presence of high level people in attendance as well as being on the organising committee. I honestly don’t know how much this should be taken all that seriously. Being involved with the lecturers of the Faculty of Film, Theatre and Animation (FiTA) in organising events, there were quite a lot of high-level names being included as a way of keeping them involved on an official level. In truth, they rarely come down for meetings, and as such I never truly feel the complete involvement in actually running the event. In such cases, though, I never truly feel that that was important: unless it was detrimental to the organisation, the tendency has always been to publicly support whatever event that is put on. Here's a tip: if you want to have an idea of who is the real driving force behind such an event, you might want to consider the second- or third-ranked name on the list. The people at the top might be more important, but you'd want to take into consideration those who actually make the difference on a day-to-day level.

It is this level that should be considered. Beyond the perceptions driven by reports of many who may not have even attended that event and relied largely on second hand information, it is even more important that we deal with the day-to-day reality. Here it is, to the best of my understanding and based on my (fairly extensive) experience: as a staff of UiTM I am often ‘strongly encouraged’ to make my presence known at certain events. There are no real repercussions should I not attend, but that is the context many must consider. Just because the numbers in attendance were impressive, it does not mean that the words of whose speaking them will travel far.

For the most part, human beings have a tendency to stick with whatever it is they want to believe in, however irrefutable the supposed logic of the argument they’re being presented with may be. I strongly suspect that the such an event may well have a willing group of people who embrace the message, but I also know for a fact that many of those in attendance was probably not even interested in the slightest. Some of these events, I attend and have left before the end, primarily because I was not entirely turned on by the proceedings. Others, I stay through to the end, but at times I have regretted doing so, primarily because these events can be mind-numbingly boring to me. (It should also be noted that some can be very enlightening; I especially enjoyed the Academic Conference of 2013).

None of this is intended as a defence for the actual event itself. I merely believe that more accurate questions and issues should be raised at the right people. Some of the questions we should probably consider might include the following: how effective was the seminar? How much of an impact did it truly have in terms of turning people to its supposed objectives? How much of this can we truly attribute to the university? Should we actually consider naming and shaming the speakers as well, if we consider their views and facts to be inaccurate and unrepresentative of the discussion in Malaysia?

Speaking of which, within that bigger picture itself, how much of the same standards do we apply to ourselves and everything around us? Or is it just those who we don’t agree with that deserve to be in the firing line?
Labels: acis christianity fikri jermadi islam monash seminar uitm