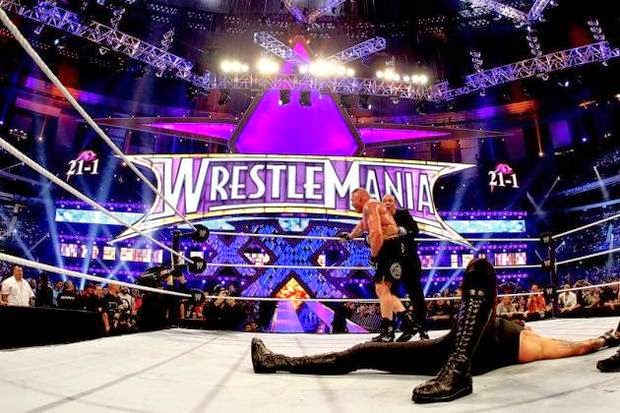 I can’t believe it.

As Brock Lesnar hoisted the Undertaker up for the third F5 of the match, I didn’t think for a moment that the streak would be over. As he shifted his weight, pushing up the big man one more time at the end of a very physical match, I didn’t think that the streak would be over. Undertaker’s body was slammed into the mat, face down, a mess of blood, sweat and maybe even some involuntary tears, but I did not take it all that seriously. I did think that three F5s were quite a lot, but hey…the Undertaker have survived plenty more. As he rolled Taker’s body over for the count, I watched with intent, but still believing that Undertaker would prevail one more time, beating the three count one more time, keeping the streak alive for one more year.

He didn’t. And just like that, the streak was finished.

Now, I full well understand the machinations of the business. Professional wrestling in the modern day is a complex beast of storytelling, theatre, event management, physical endeavour and personalities, amongst many others. It’s self-proclaimed as sports entertainment, precisely because the genre into which it falls cannot be clearly identified. It is a hybrid in all its glory.

In the immediate aftermath, my mind could not think as clearly, but my feelings were quick and strong. Brock Lesnar should not have beaten the streak. He didn’t deserve to, doesn’t deserve to, and while things may change, probably will never deserve to truly end the streak. There are a lot of reasons against Brock and for others.

I am against Brock Lesnar ending the streak because while he remains a fantastic physical specimen capable of inflicting a tremendous amount of pain through great skill and agility…he is not the model professional wrestler. He broke into the business many years ago, steamrolled over everyone, and became the champion in double quick time. However, very quickly the demands of the business got to him, and he left. He did not, however, leave in the best way possible. He left with one of the most disappointing matches of all time, a Wrestlemania match up with Goldberg, with Steve Austin as the special guest referee. That should have been a match for the ages, but instead it was limp and pathetic, the amount of effort put in not equal to the competitors’ reputation.

I also believe that it is because of his departure that Randy Orton was elevated at the rate he was. When Brock Lesnar won the championship, he was the youngest champion to have won it. So here is a man, pushed to the high heavens and given all the accolades any professional wrestler would have killed for…and he left in an undignified manner.

At least for the world to see. Of course, we will not know the behind the scenes stories that could change my opinion, but I’m basing this in a critical fashion on what I know. What I know is that Randy Orton then became the champion, the youngest ever, thus deleting that one accolade they could take away from Brock Lesnar.

He then came back after quite a long time away, and I was pleased to see him. It added credibility to the product, that extra polish that goes the extra mile, though it was disappointing that he would eventually only turn out every once in a while. I am aware that he has other interests, but the fact remains that if he is not interested in the demands of modern day professional wrestling, he should get out of the kitchen. Instead, he comes back every once in a while, wrestling the biggest stars on the biggest stages.

That’s still fine, but it is also precisely because of that that I believe the streak should have been beaten by someone else. Someone who is a professional wrestler in every sense of the word, who would maximise the effects of such a victory. Breaking the streak, over twenty years in the making, is, at a single stroke, the biggest career maker of all time. Brock didn’t need that, and Brock didn’t deserve to.

Then again…who else? This year, in spite of what many want to believe, the field is incredibly thin. For the past few years, Taker has been having face matches with Triple H. It worked out well, but I don’t know whether another face match for the third year in a row would have the same kind of drama. So let’s look at the heels, then.

The top guys, Batista and Randy Orton, were tied up in the championship angle with Daniel Bryan. Even Triple H has inserted himself into the picture, and is as much a full-time heel as anyone else. Who else? Alberto Del Rio? A formidable opponent, but he couldn’t even handle Batista upon his return. He can’t go from that to beating the streak in a believable fashion. Wade Barrett? I think he’s an accomplished wrestler, but he’s not even cared enough by the fans to get a strong reaction outside of the England and post-Wrestlemania Raw episodes.

What about the faces? CM Punk picked up his ball and left for a ‘sabbatical’, whatever that means for now. The Big Show? He’s got it made. He can afford not to win any championships for the rest of his career, and he would still maintain that strong aura about him. Of the younger bucks, the ones who could make the most of this for the rest of their career, names like Cody Rhodes, Dolph Ziggler and Big E Langston pops up without meriting another second’s consideration. Roman Reigns? He just turned face along with The Shield, a move that ensures that group has some mileage left in them before the inevitable break.

Can the Undertaker wait a year to keep the streak before passing it on to the next generation? In a perfect world, I want to think that could be done, but the fact is he is not getting any younger. He has wrestled a fairly physical style over many years, and it is due to his injuries that the big man has slowed down, doing very little beyond Wrestlemania season. I think he may want to end it now, simply because in a year, he would not be in a better condition to fight.

The streak is over. I have come to accept that, just as everything else in life that has a very limited shelf life. I realise that to be true, but the fact remains that I am sad, because professional wrestling has been a huge interest of mine for very strong personal reasons, and the streak has been a huge part of that. It felt like yet another reminder of the fragility of life, of how many things are not as permanent as you want it to be, like a part of your earlier years that is no longer there.

I’m sad about that, but I’m even sadder that the streak was broken by Brock Lesnar not because he deserved it, simply because he was the only one standing when the time came for it to end.
Labels: brock lesnar the streak undertaker wrestlemania wrestling wwe