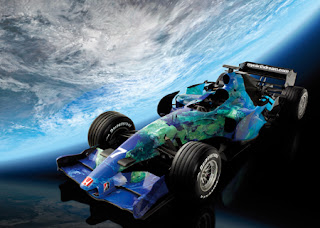 Al Gore and Honda have in common. "I have no intention of being a candidate,” said the real American president. His documentary, 'An Inconvenient Truth', had just won the Academy Award. He seems sincere in his concerns for the environment, and genuine in his effort to spread that concern. Not that it helped to it helped to douse the fire; in fact, his popularity further fanned the speculation that he'll use it as a springboard for another presidential run. “Anyone who checks the political traps in any of the 50 states will find there's no evidence of a renewed campaign,” he insisted.

Honda clearly share the same ideology. This season, their Formula 1 team will not be wearing any corporate badges; instead, the car will be covered with a picture of the earth. The 'My Earth Dream' programme is a radical concept that aims to raise awareness about global warming. Anyone who makes a donation to charitable trusts via the website can have their name printed on the car. It's a radical concept, since such space is usually used by teams to bring in money. Generally speaking, the bigger the budget, the more competitive a team becomes. Honda basically gave up millions of dollars and speed just to raise awareness.

Suddenly, almost effortlessly, I begin to notice others who got in on the act. Mobile phone operators, alcohol companies, even tobacco conglomerates. Even American Idol got in the act, their Idol Gives Back episode raising 60 million dollars (and counting) for children charities in the United States and Africa.

“It's true that the corporate social responsibility (CSR) movement in Malaysia has been gaining momentum,” said Poon Su-lyn. She is with CSR Malaysia, the only forum in the country dealing with such issues. “The objective of our network is not only to raise awareness of that fact, but to provide companies with precisely the expertise they want and need.”

“Business talking shops are fine, but the stakeholder is king,” she continued. “That's ultimately what CSR is about – companies responding to their stakeholders' expectations.”

In Honda's case, the stakeholders are the people of the world. “We hope that in raising awareness and highlighting the issues we will encourage members of the public to come together and help take on the challenge of climate change," said team boss Nick Fry at the launch of the car. This is from a team whose cars release eight times more carbon dioxide than a new road vehicle. “There's some irony in the fact that Honda are attempting to promote the environment and calling on others to address environmental issues when they are contributing to climate change by participating in what is probably the most polluting sport on the planet,” said Emily Armistead, a Greenpeace spokesperson.

To their credit, this hasn't gone unnoticed by the team. “We're quite aware it's a potentially contradictory thing to do,” said Fry. “But the number of people we can reach is immense."

What is also immense is the criticism the team has faced since the launch. The cynics proclaim that 'My Earth Dream' only became a reality because Honda failed to procure any major sponsorship deals. Thus, such a concept is a face saving exercise rather than an earth saving one. It also distances themselves from their previous owners, British American Tobacco, whose products does little to save the environment.

But it's not just companies who are trying to make the world a better place. “This is not a political issue, it's an environmental issue,” Gore preached in his documentary. He practices what he preach, though: Gore and the producers, Participant Productions, donated all of their revenue from the film towards the Alliance for Climate Protection. It's also the first carbon-neutral documentary, meaning that its carbon footprint, including all travel, office and accommodations related emissions, will be offset through renewable energy credits. “He's become a rock star,” commented Bill Cross, a political columnist, “one of the most popular people on the planet.”

Not everyone is a fan, though. “Doubt it,” said President Bush when asked whether he would watch the documentary. Australia's Industry Minister Ian McFarlane stated that they won't be taking advice from a failed presidential candidate. Despite his best efforts, in this case at least, the messenger hurt the message at least at the highest level.

It's not all about Mother Nature, however. Closer to home, Digi's Amazing Malaysians programme focuses on preserving cultural heritage. It supports individuals engaged in such endeavours, especially those in rural areas. “The company is created on Malaysian soil by Malaysians,” said their CEO Martin Lundel. “I think it just makes human sense to give back something to society that makes use of our resources.”

For fun, or for the bottom line? Do companies really spend time, money, and effort in such activities for fun? Or is it an effort to make more money? If American Idol is really that serious about saving African kids, why don't they just give the money to them rather than implore their viewers to do so? Should Honda really want to save the environment, they can just quit Formula 1 and save the estimated 17 tonnes of carbon dioxide their cars will release by the end of the season. After all, it's not as if they're making much of an impression on the racing track: at the season opening Australian grand prix, lead driver Jenson Button went as far as saying that the car was “crap.”

But they won't stop racing. And neither will British American Tobacco stop making cigarettes, for CSR is the conscience, the fail safe that says, “Hey, we're with you guys.” Such activities enhances the goodwill, the 'feel good' factor with which a company can be associated with. You might not feel too guilty smoking a Dunhill knowing that some of your RM7.90 goes towards a programme discouraging youth smoking. In this case, they even acknowledge the financial factor. “To us, Corporate Social Responsibility is about “how we make our money” rather than “how we spend it”,” the British American Tobacco website stated.

Having said that, these are only some examples of CSR. Just like everything else, it is unfair to tar all with the same brush. For every British American Tobacco, there's an Al Gore whose sincerity appears to be genuine.

But at the end of the day, does sincerity matter? Maybe Honda did fail to attract the major sponsor that they wanted, but they're a company whose revenue in the year leading up to March 2007 totalled 2.4 billion pounds. To them, the money they might have made from the car amounts to nothing more than a drop in the ocean. The same goes for American Idol: the 60 million dollars they raised is 60 million more than you and I will. It is money that, channeled properly, could make a huge difference in people's lives across the world, whatever the intentions to begin with.

Call it whatever you want: corporate social responsibility, people who want to make the world a better place, etc. It is, as mentioned previously, a movement that is gaining momentum and snowballs into an avalanche. Perhaps its own momentum hurts it, for when something happens too fast question marks are always raised. For better or worse, it is a movement that is here to stay.

At least Al Gore and Honda won't be so alone.