Surprised at a Smile 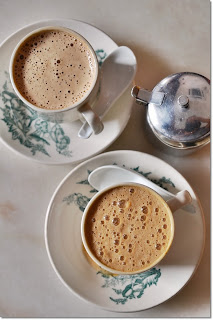 My friend ordered the food at Pappa Rich. We were hungry, it was dinner time, and we were looking forward to the food; of course, we know the reality may not match the picture, but as ever, the pictures looked so good.

She noted to the waiter that she noted the food should be less spicy. The waiter nodded slightly, communicating his understanding of the request, and moved away.

The food came, and she had the first taste. However, it was a little too spicy for her, and, being someone who is particularly particular about her food, became slightly agitated. She called for the waiter again, and repeated her earlier request, but the waiter appeared to be at a loss. Perhaps he failed to truly grasp what she was saying. After a few moments of awkward silence, my friend resigned herself to her fate, and the waiter, silently sighing sighs of relief, moved on to the next table.

From one perspective, perhaps a more complete order chit would have her write down her preference in the space provided. On further reflection, though, I wonder whether the space itself is a method through which language barriers could be negotiated.

Looking around, I then noticed that the majority of those who work in that particular Pappa Rich outlet appeared to be non-local. I say ‘appeared’, because Malaysia being Malaysia, categorising someone according to their skin tone it is not as easy you might think. Over time, however, you do develop a sense of who may or may not be a part of what Benedict Anderson define as your imagined community. It is a sense that further accentuates itself in a more foreign environment; you might be wrong, but you just know when you meet another Malaysian.

Just as surely, then, you could also see who is not Malaysian. At this and other such outlets, I notice how much we rely on other nationals. This is not a particularly new development, primarily because the very origin of Malaysia was built on the backs of foreign labour (and this continues to be the case in many situations). What I notice here, though, is how subtle shifting of structure in service industries has led to the decrease of human contact and interaction.

Consider this. You’re seated down, at an established kopi tiam outlet n established outlet selling kopi tiam and other such commodified culinary artefacts of Malaysia. You look through the menu, and the order chit is scribbled on with the code of the food and drinks you wish to order. On the right, space is provided for you to note down any special request you wish to make (perhaps this was something that my friend should have considered further). Once that is done, you call for the waiter, who will key in your desired products into the computer which will produce a receipt, which you then take to the counter to pay for at the end of the meal. It is incredibly possible that you could go through an entire meal without the most cursory of sentences, beyond the cashier themselves saying “RM34.70.”

Going beyond the service industries, I notice that quite a number of other endeavours are also moving towards that direction, conditioning the way we see things. Security guards are commonly of a foreign descent, and it is sometimes difficult to truly communicate with the very people tasked with our safety. In other situations, the human element have been removed completely in the paying for parking tickets at major shopping malls.

I do not wish to present a situation that sees us humans as being nothing more than energy cells for the machines to function a la The Matrix. After all, the above examples are nothing more than selected anecdotes illustrating my point in this particular article. Neither am I delivering a particularly scathing criticism of Henry Ford’s model, the advantages of which have helped to drive the industries of the world; lower costs accrued balances the balance sheets, allowing for more money to be moved within and without the system.

However, the adoption of such a mass production model adopted to simplify and save a few bucks may, in many respects, divide rather than unite. The lack of human contact beyond the most elementary of interactions may dehumanise more than anything else.

A certain truth emerges, then, in this potentially vicious cycle. Knowing less about a person makes it easier to fix certain ideas and impressions, a projection of identity that can help in the crystalisation of certain ‘truths’. Foreigners have always been looked upon rather suspiciously. I suppose this applies to ‘the other’, and even amongst Malaysians we have a tendency to form certain stereotypes. What chance, then, do the people with whom we have relatively little contact have of debunking these ‘truths’ simply because they have a different passport to us?

We could detect a certain irony in an article that simplifies in looking at oversimplification. Of course, this does not necessarily cover every single foreigner who has set foot in in a foreign land, and there are other factors are play here, such as a media that thrives on the creation of fear and politicians willing to manipulate the sentiments of the public, amongst others.

Nevertheless, it is the system that we do have. The alternative would have been to hire more local labour, or to further train the foreign labour to better satisfy the whimsical fancies of Malaysians who can, it has to be said, be very picky when it comes to food.

After we were done, he came to clear the table as my friend settled the bill at the counter. I gathered my belongings, and gave him a quick smile and thanks. He looked at me, a rabbit in the headlines caught off-guard by my smile and words.

Humans being surprised at a smile.

I'm pretty sure that says something about us.
Labels: benedict anderson fikri jermadi service industries surprised at a smile