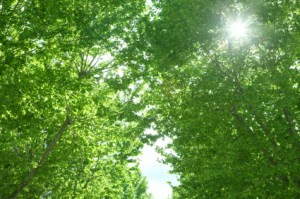 I hold her hand in mind, our fingers intertwined, as we slowly made our way through the park. The sunshine blazed its glory, the tempers tempered by the cool breeze blowing.

There are people here. Plenty of them, walking, talking, smiling, laughing, living. An area of such green contexts: the trees, the plants, the grass, and…life. Everyone here is recharged, green and good to go. Nobody is in the red, at least not for now.

The lounging chairs appear to be available for all, for a small fee. We consider taking a few, but we didn’t know where to pay for it. Neglecting to feed this further, we consider feeding ourselves. Waffles, ice-cream, chocolates and drinks. All available at the stalls nearby, bustling with economy.

We continue, onwards and upwards, step by light step. It is a time to enjoy the moments, the seconds, the time of the two of us together and being alive.

We reach a part shadowed by the leaves and branches above. We sit down, wary of a little dirt, but then again, what are we if not the dirt, the earth from which our worlds are made. It is to the earth we shall return to in the end, after all, and it’s probably not such a bad idea to familiarise ourselves with them.

Eventually, I lie down on my back, cushioned by the cushion fashioned from my jacket. She remain seated, her hand stroking my hair as I look up, at her, beyond, past the branches and the leaves, the blue skies and the white clouds, into the space beyond.

I come back just as quickly, her warmth keeping me alive and grounded. The sounds of the birds distract, pleasantly so. Just enough to keep things singing and ticking over in my heart. My appreciation for green lungs grew, as much as my own expanded.

The conversation of others dulls in the background, murmurs remaining as insignificant to us as we are to them. Another couple, sitting against the tree trunk flick through a few pages of their books.

In the most public of places, we become more entrenched in our own worlds.

That’s OK, though. Lying down with the loves of our lives, becoming closer to nature, appreciating the birds and the leaves, breathing in and out…slowly, but quietly, being alive. I close my eyes, and I wander no more.

That’s how I would spend my last days.
Labels: fikri jermadi last days