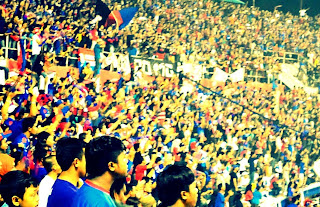 "Not that anyone considered the possibility of him leaving so early, but rumours ran rampant near the end of March that Güiza’s stay in Johor would be cut short. He, along with Del Nero, was suddenly considered too expensive to retain. Del Nero’s impact had been limited; a loss of form not aided by recurring injuries which denied him the opportunity to truly show what he is capable of. But Güiza? Güiza’s was the leader everyone had been following, the man who had sold out stadiums and put Malaysian football back on the back page of Malaysian newspapers. In an era when that has usually been the honour of teams from the English Premier League, that says something."

*An excerpt from an article I wrote that was published by In Bed With Maradona. To read the whole article, click here.
Labels: dani guiza fikri jermadi johor darul takzim malaysian football