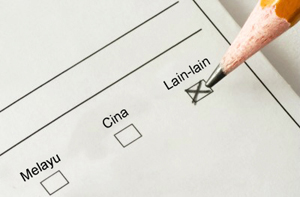 Listening to the rumble in the jungle that is social media, there are some interesting and yet somewhat discomforting sense of realities coming to the fore. It is a rumble that was slowly gather pace prior to the 13th General Elections held just over a week ago, and though it has had its peaks and downs, there remain some strong sense of dissatisfaction that lingers. Of course, this depends largely on the forms of media you are exposed to, spouting forth their respective ideologies in a variety of discourses.

It doesn’t help, of course, that the first day of the week was the thirteenth day of the fifth month of the year. Globally speaking, perhaps there are other meanings attached to it, meanings others consider to be of a bigger relevance. For example, apparently Captain Arthur Phillip left the South Coast of England on this day many, many, many moons ago with a ship full of prisoners. Significant? Well, they would form the penal colony that would later be known as the Malaysian middle- to upper-class’s closest Western world get-out clause.

You may detect the sense of cynicism there (at least you should), and I wish for you to hang that thought on a hook somewhere, instead of discarding it aimlessly, for we shall return to it.

May 13 is a date that lives long and hard in the minds of many Malaysians, whatever levels of consciousness the date actually reside on. It is the big elephant in the room, the deafening silence, that gets bigger the more it is ignored (the silence, that is, not necessarily the elephant). It was a day on which a number of despicable acts, based on the racial polarisation policies that was in effect (and still is in many ways), amongst others, were carried with extreme prejudice.

I don’t, however, want to necessarily talk about that, for it is not the main fulcrum of the points forming in my head as I write this, but it is at the very least useful to keep some of these things in mind, for the rumbles I have mentioned earlier remain.

These rumbles are to do with notions of race and difference, of unity and of discontent, amongst many other such concepts linked together.

During the election day not that many moons ago, rumours were abound of foreigners being brought to key polling stations around the country. These were usually presented in the form of video and pictorial evidence, taken by bystanders who believed themselves to be historians taking action through inaction. The very act of committing them into 1s and 0s, another favourite of the 21st century crowd, is not necessarily equated with the kind of action we may wish it to be.

I watched the videos, and I analysed them (lie your cameras horizontally, ladies and gentlemen, and they will instantly be more cinematic, and more in line with the most common forms of video and image presentations). I had a look at the pictures, and I read the comments. The main thing I wish to note is how interesting it must have been to have dark skin on that day. Should you be making your way with a number of your friends to polling stations, be prepared for a phalanx of papparazis taking pictures of you as you walk the red carpet! Perhaps Andy Warhol is right after all, although I do not imagine that he would imagine these 15 minutes played out in such a fashion.

I say interesting, because it supposes that the kinds of foreigners that many Malaysians are supposing to have been vigilant for are our darker skinned brothers from South Asia. All sorts of jokes and judgment have been passed forth under the name of vigilance for the purity of the polls. They ignore, of course, the fact that a number of Indonesians have also been offered similar opportunities to do the same, because a large majority of Indonesians look…exactly the same as us.

“Well duh, Fikri!” shouts an enlightened member of my readership. Perhaps a similar train of thought is running through the minds of many of you right now, but here, then is my point.

When it comes to any sort of politics on the national level, is it possible at all for Malaysians to start looking at things through a prism without the colour tone of one’s skin being a deciding factor?

I say this because for many years, I have heard of many people rejecting the idea of race being utilised as such, not just in this but also in other parts of walks of life. Why should this box be ticked instead of that? Should our sense of brotherhood and citizenship be our guiding principles? Would I be willing to cede so much of my own power to the ruling government of the day in dictating what my mindset should be?

I have seen and heard of many such positive forms of thinking. Whether it is entirely positive largely depends on your own point of view, but my leanings may be further explained from the fact that I see myself first and foremost as  human being. Perhaps this could be termed the humanist approach, if you so wish it to be.

Here’s something else I see from my point of view: on the fifth day of the fifth month of the year, I see a fairly-democratic system in effect, one whose potential was not carried out to the fullest simply because of the many factors beyond our actual control. That sense of powerlessness creates a feeling of pathos, emotional attachment that predicates the extremity of some reactions. I get that, and to a certain extent, I do not disagree with it.

What I do disagree with is the willingness with which we have handed over control to parties we do not owe much to, if at all. The national discussion have been dictated on largely race-based terms; even positive news by and about politicians willing to bridge racial divides have been received on the feel-good basis of “Aww, he’s Malay and he’s supporting us. We need more people like him!”

My question here is whether it is possible for those who have already branded race as a non-factor to treat it as such. Is it not possible that we look at this person and see him as a Malaysian willing to stand up for what he believes in for the betterment of other Malaysians, as another human being? Can we not look to results of the election, for example, and simply analyse them based on more inclusive terms?

You do not have to agree with any of these things. That’s your right as a citizen in what is officialy a democratic nation. There’s nothing wrong with supporting the maintaining of the status quo, if that is truly what you believe in and feel strongly about.

We  disagree with divisive concepts put forth by people who probably should know a lot better. And yet many of us speak, think, do the things we do based on the very things we hate, constructed by the very persons we do not like and agree with. Many have identified this, but it appears fewer believe it, for when we live our lives by the so-called unimportant codes of others, we cede our powers to them.

What does that say of us?