The Politics of Arrogance 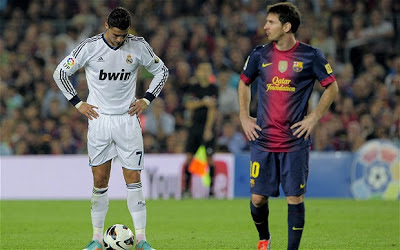 The grimace on the face of Cristiano Ronaldo as another pass, another shot, another cross goes astray is becoming more and more familiar. It could be because the shots and passes are getting more wayward in their execution. More often than not, that is becoming the defining image of the footballer, perhaps mirroring the man that is encased within.

Across the country, dazzling not only his home crowd but the global television audience, Lionel Messi streaks away from yet another defender, jinking left and right before slotting the ball home, usually in the only spot the goalkeeper can’t reach. Sometimes, he can even afford to whack one in from further out, but the smile plastered across his face after the ball nestles safely in the back of the net is becoming his defining image.

In many respects, we are incredibly lucky to be witnessing two wonderful footballers who are peaking at about the right time in their respective careers. The challenges that each have set for themselves (and indirectly, for the other) have made for some wonderful football with numerous records being broken time and again. They fall like dominoes, those records, as Ronaldo and Messi flat-track bully their way into history.

Of course, within the discourse we have been conditioned, there is apparently a need to define an undisputed number one. The crème de la crème, the best of the best, the greatest ever in the history of the game. When you think about it, it’s a very Highlander approach we have, except that we don’t necessarily behead the guy who comes in second. As Russell Peters' dad might have said, that would be counter productive.

Nevertheless, the one thing I wish to consider is this. Messi and Ronaldo have been paired against each other in pretty much everything. In pure statistical terms, Messi wins in the sense that he has scored more goals than Ronaldo. He has won more, too, especially if one is to consider only the Spanish-specific context of their duel.

However, that’s the team game. Football is very much eleven players pitted against one another, and the organic development and unit that is the Blaugrana should not be underestimated. Consider the more ‘instant’ culture that is the policy in the Spanish capital team, and we can see a bigger difference. In short, the winning team is only and exactly that: a team. Many have commented that there is no I in team, but fewer pointed out that there is ME in team.

The ME of both Barcelona and Real Madrid is definitely Messi and Ronaldo. They have been very effective, they are both only as effective as their team allow them to be.

What if you take all of that away, though? What if we are to consider only the two of them, stripped naked from the very protective cells of their respective teammates, and consider only their actual footballing skill and attributes? Gets trickier doesn’t it?

Here’s another spanner in the works of this, and the main crux of this post. Who wins? We don’t really know.

However, who would be the popular choice?

No prizes for guessing that one. I’d go so far as to put a sizeable amount of my rental deposit on that, should the odds be favourable. They won’t be, simply because Messi’s ascent has as much, perhaps even more so, to do with his image that it is with his skills on wheels.

As such, the nomination of ‘the best’ should always be prefixed with this question: do we pick the best, or do we pick a player who we like the most? Is such a choice predicated on what the player actually is, or is it more to do with the alignment of an assigned set of characteristics to our own?

Lionel Messi often wins the popularity contest, and he would therefore often be crowned the best. His smile, his stature, his boy next door look that breaks the hearts of mothers and daughters everywhere (one can imagine the complete opposite to the saying "Mothers, lock up your daughters!" should Messi happen to be strolling down one's street). That’s the narrative, the cause and effect right there.

Just how fair is this, though?

He will, therefore, do every single thing in he can within his powers to expand his powers on the pitch. He sleeps the appropriate amount at the appropriate time. Despite the glamour surrounding him, he doesn’t do much off the pitch that would have, in a more sedate time and era, garnered that much attention. A couple of dates here, a few movie premieres there, and…that’s it. Everything he does is done in light of his focus on his performance on that green patch in the middle of the stadium.

So he gets angry when things does not go to plan on the pitch. That’s OK, though He’s a winner. And yet…

It is the very expression of this attitude that sees him branded as arrogant. Certainly, within a very large group of people, the personal distaste that they hold for the footballer has something to do with this. He’s arrogant, they say. Too flashy, they think. Not one of us, it is stated.

I don’t know about that, to be perfectly honest. I do not presume that every single person on the planet hold the same view. However, I do believe that for those who do, it is this very same view that allows for a more blinkered assessment of someone who is a fantastic athlete, and, in many respects, the complete footballer.

I see no problem in someone who has a clear objective, and states it. I have no issues with a man who wants to be all that he can be, and lives his life accordingly. He gets hurt, he feels pain, and he allows frustrations to overrule his head when the plan worked on so assiduously is not adhered to, either by design or by fate. Just like all of us, if you really think about it.

And yet, this is branded as arrogance. Super confidence is not something someone is allowed to have, should one wish to win popularity contests, simply because the judges have delusions of grandeur when it comes to either their own skill sets or aspirations.

Perhaps this is why I myself have been called arrogant. It could very well explain why Ronaldo is one of, if not my outright favourite player in the world.

I spent years admiring the skills of Ryan Giggs, and consider him to be one of my biggest idols…on the pitch. Sleeping with my brother’s wife, however, is not something I aspire to, and yet let us compare the reaction Ryan Giggs provokes to that of Ronaldo.

Now that, you can think of what you will.
Labels: barcelona cristiano ronaldo lionel messi real madrid ryan giggs