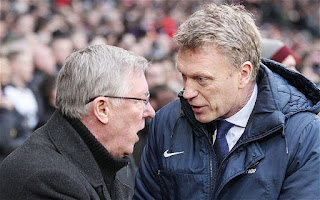 …the more they stay the same.

Watching the final match in charge by Sir Alex Ferguson at Old Trafford, the style and substance of this Manchester United team left me wondering what the future may well hold. Much has been written about it being the end of an era, and while I am guilty of some of that too, the appointment of David Moyes made me wonder just how much things would actually change.

It’s well known that the United managerial job is arguably the most desirable in club football, perhaps even in world football. Rarely do such an opportunity arise, when a seat right at the very top of the table is made available, vacated readily so by the departing king.

What more, the dish left behind is more than enough to appetise any taste. Right across the spectrum, you have players who can do pretty much everything you want and need from a winning football team. Each bring their own unique set of skills and experience, ranging from the very experienced (Giggs, Ferdinand) to those whose best days probably lie just ahead (Smalling, Jones, Chicarito).

A ready made superstar to tide things over? Step forward Robin van Persie. A player who gets better as he gets older? Line it up, Mr Carrick, and give that ball a good welly. Need a bit of pace and unpredictable showmanship in your team? Give Nani, Young and Zaha a call (although in the case of the former, it may be a little too unpredictable).

As a squad, it is ready to stand toe to toe against any foe, and give them a good fight.

So what changes, then? The way we could play? Maybe. United have been famous for the wing play over the years. It’s not so much the case on modern-day football now, but they still have the wingers to call upon if that’s the case, while the full-backs are expected to provide width in key attacking areas as well. It certainly was and still the case for David Moyes down at Goodison over the past couple of years; statistically speaking, the combination of Leighton Baines and Steven Pienaar has been amongst the most lethal of left-sided combinations in Europe.

United also like to break from midfield. That has been a tradition at the club, and it certainly has been the case. Some of Sir Alex’s finest players have been marauding midfielders; his first United captain, Bryan Robson, is one such example. Others, like Keane all the way through to Scholes, have continued that tradition; Scholes nearly added to the legend by doing exactly that against Swansea, with only a weak shot failing to test Gerhard Tremmel any further in the first half.

But wait. That’s also been a very strong component of the Moyes blueprint for Everton for the best part of a decade. It is only in recent times that Mikel Arteta, after having signed for Arsenal, is converted into a more ‘disciplined’ midfielder, tasked as much with screening the defence as he is with initiating attacks. Fellaini is still doing much of the same, while Tim Cahill, generally regarded as one of the finest bargains of the Premier League era, has proved to be adept at getting on the end of crosses in the penalty box.

What about the defence, then? Tactical permutations throughout the years meant that Ferguson himself adapted to the changing times, but he has always been dependent on a strong and solid back four. Bruce and Pallister formed the first great defensive partnership at the back; of the season just finished, Vidic is still the captain of the club, while Ferdinand, in the twilight of his career, was just voted into the PFA Team of the Season. Behind them, what the likes of Jones, Evans and Smalling lack in relative experience, they more than make up in pace and defensive nous that will be sharpened with years to come.

Again, change the names around, and you’ll find that Everton themselves have as fine a tradition in rearing a strong back four. David Weir proved a strong influence in the years gone by, while the likes of Joleon Lescott and Phil Jagielka did more than enough to gain international recognition for their defensive work.

Even the goalkeepers are the same; while Sir Alex had trouble for a few years replacing Peter Schmeichel, he had also prided himself on strong goalkeepers like Jim Leighton, Edwin van der Sar and David De Gea. Tim Howard was did not manage to extend his honeymoon first season at Old Trafford into something more permanent, but boy, did he fulfill the potential for the Blues; before that, Nigel Martyn kept the goal safe for them for more than a few seasons.

Up front, though, is where the biggest difference and range of options lie. Much has been written about van Persie, Wayne Rooney, Danny Wellbeck and Javier Hernandez. Moyes, his hands tied up around his back, failed to have such a big range of options, but a look at his strikers past and present indicated that he would have liked to have similar options up front, with the likes of Yakubu, Saha and Jelavic having graced the club. Saha, Howard, Darron Gibson and Philip Neville themselves provides a lot of transferable footballing know-how from Old Trafford to Goodison Park.

So we come back to the first question, then. It is indeed the end of an era, but how much will things actually change?

The answer, I feel, is not very much. Moyes is doubted largely because of his lack of experience in dealing with names as big as the ones Manchester United have and have had in the past. The temperament of a manager plays a leading role in how they handle any given squad. In that, Moyes, with a background so similar to Sir Alex’s, may not be all that different either. Simply put, you would not want to encounter them when they’re angry. Contrast that with Pep Guardiola, for example, or even Jose Mourinho, who would probably stand on the sidelines of a fight hurling barbed insults or poking its contestants in the eye instead.

Would Mourinho dare poke David Moyes in his eyes? A good question whose answer may well prove as entertaining as it is ridiculous. It is, of course, not the deciding factor, but it does provide us with more than a hint of how things will actually play out.

His lack of European experience may also count against him, but such things could have also been leveled at Sir Alex so many moons ago. There’s only one way to get experience, and that is by actually getting it. He didn't win a trophy, they said. That's good, but let's look at the people who did win trophies during his time there. Harry Redknapp won the 2008 FA Cup with Portsmouth, but I wouldn't touch him with a bargepole for the United job.

Roberto Mancini, Roberto Di Matteo and Kenny Dalglish won all the top-level trophies in England last year, but a year on, remarkably (and for a variety of reasons, it has to be said) none of them were deemed to be good enough to hang on to their jobs.

Looking abroad, a number of candidates stand out, like Jose Mourinho and the lauded Germans of Jurgen Klopp, Jupp Heynckes and Joachim Low, but the chances of any of them being of a good enough fit for the club (communication and experience factors in here as well; in the case of Heynckes, maybe too much experience counts against him, for I don't forsee him being the best long-term option for anybody for now).

The long-term. It is with the long-term in mind, probably allied with a sense of respect towards the tradition of having employed the manager primarily from the British Isles, that makes Moyes the most sensible candidate around. Some say that a similar thing happened previously without a happy ending, when Sir Matt Busby handed over the reigns to a fresh-faced Wilf McGuinness. What that assessment failed to consider is that though it is not without risk, McGuinness was not a manager with eleven battle-hardened years worth of top flight experience.

David Moyes may be a novice at the very highest levels of management, should we consider what he has achieved thus far, but he is no wide-eyed fool. Sir Alex has retired as the manager, but he will still be a part of the set up there at Old Trafford. The new gaffer will be his own man, but he is not stupid enough to let his ego get in the way of seeking advice.

Everything has been prepared for him and for United, and it is not impossible for things to go horribly wrong. There are reasons for people to consider Moyes to be unsuited for the job, but my point in this blog is that there are also reasons to be positive. Ultimately, come next season, there will still be a hard-faced Scot prowling the touchlines at Old Trafford, bellowing instructions to the players and raging at referees for more added on time to be played.