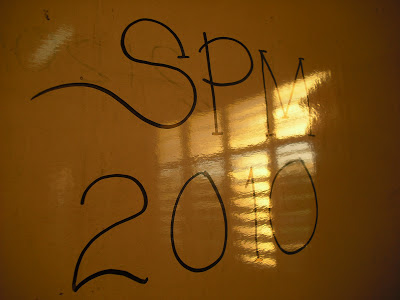 A number of you may have known of this, but late last year, I took my Sijil Pelajaran Malaysian at the grand old age of…well, I’m not telling. I’ll let you guess that, but I think it suffices for now that many people are somewhat surprised at my candidature for the papers.

This came about as a result of my direct employment by the Faculty of Film, Theatre and Animation of Universiti Teknologi MARA. In effect, being employed by a government university also means that I am a government servant, which is a whole other kettle of fish together.

The thing is, all full-time, permanent government servants must have at least a credit in Bahasa Malaysia (BM) at the high school level. This is something I do not have. I have garnered enough experience and paper qualifications for someone, somewhere, to deem me worthy of imparting some of these film and media knowledge and experience unto the next generation. However, the fact that I never actually did sit for my SPMs is a fact that would come back to bite me firmly in my buttocks.

So, register for the papers I did, and sat for them I did as well. It was a very interesting and enlightening experience, and there are some aspects of that I wish to explore further here.

I have to admit that I can finally see and understand where my students are coming from. In asking for their critical analyses of different types of films, many of them have been keen to include a certain film’s moral values, or the directors intended social statement. I hasten to add that while these are not necessarily unnecessary, this tendency to lean so far to this side has left me feeling underwhelmed when it comes to the more (for the lack of a better term) critical stuff.

For example, in answering the questions for the literature selected for the exam, I notice a strong tendency in emphasising the moral aspects and social values of a certain book or literature. It appears to be somewhat straightforward, but this, I think, directly masks what many would consider as moralising and dakwahing under the umbrella of critical thinking. Perhaps that’s not quite the outcome, but as I mentioned before, I can imagine this being confused and mixed up as one or the other.

This wasn’t necessarily limited to the BM papers, of course; having time to sit for the English papers as well, I did exactly that. If anything, it was a mere translation of the same exact questions. The methods of the devils were exactly the same, with only a change in name and locations for the perpretators and the scene of the crime.

Thus, I can see how easy it was to somewhat game the system. It is true, then, what many people say; starting a mere 12 hours before the actual exam itself to study for the papers, I managed to achieve what I had wanted. Of course, once again, the situation and circumstances were vastly different, and my candidature cannot be directly compared to a more typical candidate. Nevertheless, having taken part in the programme, I understand better that memorisation mattered far more than actual rethinking of certain issues that would truly test a student’s understanding.

More to the point, however, the entire system seems to point towards a very certain notion of what is right and wrong, and what is good or bad. This, of course, is nothing new, but nevertheless I found it entirely interesting to have gone through all that.

The SPM is a very important part of someone’s life. Hell, any kind of examination, one set as the final benchmark of high school and scholastic ability, is important. The fervour with which people treat it with, the sense of importance and enthusiasm does not dampen the fact that in many respects, it is a part, a rite of passage, that any single person has to go through in order to move on to the next part of their life.

I didn’t do all that. I had a different passage, a different rite, but going through this as I am now, at this stage of my life, makes me somewhat melancholic. The years, however, predictably made me wiser, and here’s a little something I want to share.

It is important, but is not the end of the world.