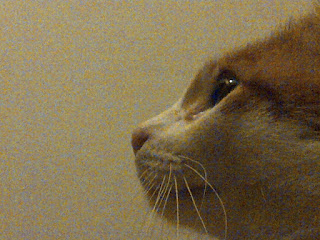 My housemate has a cat named Malaka. It was a street cat, but the emphasis is on the word ‘was’; Malek found Malaka in Melaka (where else), and brought him back to KL. Malaka has been in the house and by our side ever since early last year, if I am not mistaken.

Initially, it was a cat that was difficult to take to, once it grew beyond being a kitten. I remember coming back home after long days out, and seeing Malek and Melor on the couch in the living room, cooing over Malaka as if he is a newborn. It was sweet to see and nice to somewhat be a part of.

Malaka, though, was very shy. In the early days, he would often run away from me; any effort to rectify this slowly would result in the ice within melting, before freezing up in an instant as he would run away, heeding the call of Melor (though as she herself readily admits, it would be because he was more attracted to the food) rather than hanging out with me.

Over time, however, things changed. I work very odd hours, which means that I a lot of the time I get home fairly late. The house is dark and quiet, and everyone is asleep.

Everyone, that is, except for Malaka.

Having parked my car, I would walk to the front door looking up at the grilled balcony above. Malaka would be waiting, his head sticking somewhat dangerously out from the spaces amongst the grills. He sees me coming, and he would meow. At times, it would become a race, to see who would win: me, opening the locked gate and doors, or the cat, trying to see if he can get out for that one ounce of freedom.

At times, he managed to. He would go off to enjoy the freedom of the world that was denied to him for most of the day, while I would be worried sick about him. He is, after all, not my cat, and I would feel somewhat responsible had he managed to ‘escape’ during my attempts to enter the house. Once, after my sister's reception, I had returned home somewhat late, with plenty of things to be brought into the house. Opening the door, I could not anticipate the cat's wily agility, and he managed to escape.

Funnily enough, he didn't really run away. If anything, he loitered around the front yard and the area in front of our house. Had he been a Malay boy, he may have been called Mat Tembok. Alas, Malaka has to settle for the very unique, if somewhat still-racially-tinged, name.

Settle, however, wasn't what he was doing. So there I was, dressed to the brim with the proper Malay outfit, complete with the sampin and everything. As an aside, it is an uncomfortable adornment to have when one needs to relieve oneself in answering the call of nature. Also as an aside, it is not all that great to be wearing chasing after cats in the dark, and slipping down the side of an incline. Simply put, very uncomfortable. I let him go, and went inside angry and guilty at the same time.

The next day, however, I went out and when I came back, he was perched somewhere near the door, right as rain. I had thought that he was gone forever, and yet, here he was.

And here he was. Every night, staying home, with very little of the human company he may be entitled to claim. I often wonder whether he feels the same loneliness that we all feel. Surely, animals are sentient beings with more than a possibility of empathy for one another. Such feelings can't really be exclusive to just us, can it? I don't really know; sometimes I wonder whether the kind of solitude he finds himself in really does provide the contentment for himself.

Every night I come home, I feed him. I stroke him. Perhaps even more so than in the recent past, Malaka has become more than just a pet, for even though he does not belong to me, even if such a creature of God belong to another being, even if wonderful creatures retain the same memories and feelings we do, I find that it is in those moments of silence punctuated by the rain outside that I have found my partner in solitude.