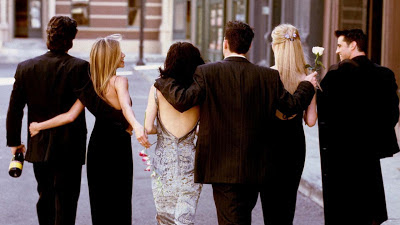 In my head, they are now all living their own separate lives.

Joey, as we know, went off to try his luck in Hollywood, but unfortunately he didn’t quite make it to the level he wanted to.

Monica and Chandler, meanwhile, would have their hands fairly full with the twins. They would be around ten years old by now, which would mean that certain things like costs and educational opportunities would have been seriously considered (or about as seriously it can be considered by Chandler), before being doubled down.

Monica would be a stern mother, insisting on the kids using the coaster every time they sit down in front of the TV watching Cartoon Network’s latest programme. Chandler, meanwhile, would be the good cop in the relationship, being the one his children would run to seeking advice on their own trials and tribulations in school. I suspect it would not be too early by that time to have had romantic crushes, especially more so in the Facebook age.

Ross wouldn’t really use it, though. He would have an account, but I don’t know how often he would actually use it. In fact, I reckon they would all be fairly traditional in that sense, prefering their communication to be done at least verbally, if not face to face. Rachel, on the other hand, would probably have @RachelGreen as her handle, which possibly suggests her being an early adopter of such social networking, simply because it is the latest.

The differences between the two, though, would not necessarily be a hindrance; if anything, they come together and be good and loving parents to Emma. Emma, by now, would have been about twelve years old. Though the difference is slight, it is enough for her to be the de facto leader of the Geller children whenever Ross and Rachel would come to the suburbs to visit Monica and Chandler.

Their kids would potter around in their backyard. Playing Twister? Maybe, maybe not. I imagine that they’d be pretty active, but not to the point of disobeying their parents. Monica being Monica, she may be strict, but she only has their best interests at heart by insisting that they don’t go too far. Perhaps by now, Chandler would have gotten over his fear of dogs, and there’d be one or two dogs around. Joey, in theory, would have eaten almost all of the food, but he’s not back as often as he used to be back when they first moved out here. Though his stuff is still in his room, the room above the garage is becoming as much a garage of junk in its own right. Monica would insist, fight and scratch, but she would have accepted that a family of four (and a couple of dogs) would not necessarily be exactly the same as how she imagined it to be.

Mike and Phoebe, though, are the furthest. Phoebe would end up spending more and more time with Mike’s friends and family, and though they still keep in touch, their actual physical connection to Phoebe is probably the weakest. By now, she probably would have taken full advantage of the fact that she can travel internationally. Mike being relatively wealthy, they would have taken in the Bahamas again, where things really got going for them. Perhaps France, where Rachel nearly went, because Phoebe can speak French. That’s a plus, so why not we make use of the plusses we have, right?

What would they actually be like, though? What kinds of lives would they really have led? To ask these questions and more of characters that existed as nothing more than mere figments of someone’s imagination is not really practical. You’ll never get a prim and proper answer. Perhaps they would all have gotten a Whatsapp group set up. Maybe, just maybe, people like Carol and Ben would also pop in (maybe not so much Ben, since he would be in university by now), and let’s not forget Janice.

When a TV show dies, sometimes it is sad to not know what happens next in the lives of these others we call our own. We become attached to the characters and their stories, and we see how these iterations become important figures in our own lives. They serve as a point of reference in conversations, they become archetypes that we compares ourselves to. In short, they become our actual Friends.

I don’t know whether it’s all that appropriate to consider the above, but in my head, that’s how it went.

That's how I would quite like it to remain.