Boy of the Rovers 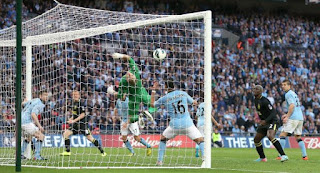 There was a feeling in my bones. It was a funny feeling, a familiar feeling in many respects. The sense of an impending victory, the sense that the victory to come is something that many would not expect, but it would not be undeserved.

Callum McManaman pushed the ball out wide again. He wouldn’t necessarily get past Gael Clichy, the French defender sticking with him as close as possible, or at least trying to.

The day started out warm and sunny, the sun coming out for Wigan’s big day out. The grass was smooth and clipped, allowing for some crisp passing. It would suit him that day, but just as ominously, it would suit their opponents.

He looked up. Multi-million pounds worth of talent, standing in front of him. Money, however, is the furthest thing from his mind now. Professional footballers are funny beasts like that. Often portrayed as capitalist monsters, selling themselves to the highest bidders, pushing becomes shoving as their true nature breaks through the façade.

Players want to win. Full stop. All the money in the world won’t necessarily stack up as nicely as it does on the mantlepiece, now, does it? In fact, when was the last time many of them actually saw the real money they earn? Money, much like anything else, has becoming just as digital, the zeros in his bank account also made up of ones and zeros themselves.

His direct opponent for the day, Clichy himself, left Arsenal of his own accord, driving through a transfer to win things. It was a path well-trodden. Henry and van Persie, amongst others, would win trophies within a year of leaving the Emirates; Fabregas claimed the Spanish Supercup within months.

Many have said that the FA Cup has become devalued in modern day football. True? Maybe. Perhaps the rewards for winning the cup has lessened, and the spotlight is no longer as brightly shining on the competition as it did before. The cash prize is not as big, and the European competition awaiting the winners is the one many Premier League teams can’t really wait to get out of.

Try telling that to McManaman, as he continue to tear Gael a new one.

Roberto Martinez continued to bite his fingernails. He is on the edge, almost in a literal sense, the tension rising as the game continued. He had preached his philosophy, he had ingrained in them his ideas and formulations, but at the end of the day, he is not the one crossing the line, stepping unto the green turf. They are, the players, his players.

They fought for every inch of the grass. Aguero feinted this way and that, but Boyce was the rock that impeded his progress. Tevez got himself into position, and, but for the trailing leg of Joel, sure thought that he had fired Manchester City into the lead. Kone held the ball up, turned and looked up, and sent a searing pass right into the path of McManaman. McManaman, taking his time, took too long, and tried to steer a shot into the far corner that never was. Kone slammed the turf with his fists in frustration, the signifier failing to encapsulate the signified. Kevin Keegan and company would eulogise him during half time, but none pointed out his failure to pass to Kone who appears to be the better option at that time.

It was a frustration Martinez himself can relate to. Everything they had, they threw at the sea of light blue, but it was swatted away, much like the swatting away of questions he did prior to the game itself. The Everton job, after the season, is widely speculated to be his. Of course, he can’t say anything, but not being able to say anything is not a good enough answer to the baying press.

“All that matters is right now,” he had said in a press conference earlier. “Nothing is going to distract us or take our focus away from that.”

Big game conspiracy? Possibly. They had a number of penalty shouts that seemed credible in his eyes, but then again, he wasn’t the one in deciding. The man in black wasn’t wearing black today. Instead, he finds himself being one of the men in black; would he be as decisive in settling the final?

Maloney opened his eyes again. The rain had gotten into his eyes. He had come a long way from Miri to let that get to him. He tried hard to pick out a target. He was here before just now, but reality failed him, the wind taking the ball further than he had intended, rattling the crossbar instead of nestling in the far corner. Joe Hart had not moved, but even if he did, would he have saved it? I doubt it. He may be the England number one, but he failed to deal with the one shot that was on target on the one day that could decide whether Roberto Mancini is granted another season in charge.

He moved, just as Ben Watson did. He had sat impatiently on the bench, waiting for his chance. He had come a long way away, though Camberwell wasn’t as far away as East Malaysia, of course. If anything, it was a homecoming for him, but sitting on the bench may not be something he wants to have written in his epitaph. Camberwell was once one of the top five crime areas in England and Wales. Not just England, but Wales as well. Top five. It’s criminal that he’s sitting on the bench, he thinks, but he soon gets up, and gets the signal.

He moves, his eyes following the trajectory of the ball. Now, this is the time. Focus. Head the ball. Could this be it? David vs Goliath in the FA Cup final? Last minute winner? After having broken his leg late last year? Roy of the Rovers, and all that jazz. Does it get better than this? Maybe…Premier League survival would be good too.

That, however, would be for later. For now, though, for now…focus. Head that ball in. He sees the ball rustle up in the back end of the net. The reality sinks in, dream crossing over the lines, coming into this real world. He runs off, screaming his head in delight.

And the win brought them the cup.