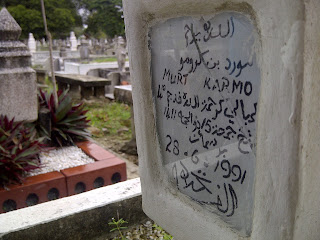 I walked those narrow roads, the fine pathways within which we find out ways throughout the graveyard. Muslim graveyards tend to be very compact, tight, at least the ones in Malaysia.

I'm here to visit my aunt in Muar, Johor, somewhere in the south of Malaysia. Another aunt of mine passed away recently, but I was unable to go back for the funeral, so I suppose, on some level, I was looking for some sense of atonement. Her grave was in a fairly newly developed part of the graveyard. My late grandmother, Esah Othman, along the same column, albeit allocated a spot closer towards the other end of the graveyard. There remain plenty of area in the land allocated to the establishment.

I've not been very good at keeping up with my friends and family members. Years ago, I had made a much bigger effort, keeping in touch with a number of them through the wonderful form of email. I had emailed long and lovingly-written essays from my life, entitled Chronicles of Korea, KL, Seoul, wherever my journeys happen to take me to at that particular time. Over time, they died down for a number of reasons, a reminder of the boy before the man chiseled a more lonesome form of existence. It wasn't a problem, and I enjoyed this type of 'growing up', but rightly or wrongly, the end result is someone who, on the outside at least, appears a little more callous and uncaring.

It is an impression I do not care much for.

My grandfather, Murat Kromo, the man who made his way from Java, someone to whom I owe my existence, is also around here somewhere. His is a grave more familiar, for it was a place I had visited many times for an extended period of my life. Those times, and that period, however, is getting further removed from my life, and so we got back inside the car, and drove over to the other side of the graveyard.

We eventually found the grave. I squatted nearby, and quietly and briefly prayed for the man who passed away when I was merely seven years old. He remains nothing but a memory that lingers, one with a smiling face, a pair of glasses considered hipster by today's standards, and big ears bestowed upon my father and eventually me.

I looked around, and noticed a number of other graves that were rather dishelved, and in various states of disrepair. The thought passed through my mind that their family members probably did not take care of these graves, but perhaps the true answer lies in the fact that they are no longer remembered as fondly. Memories turn foggier by the year, as people live their lives, become busy and move on, expecting somewhat haphazardly that such responsibilities no longer holds any weight.

I am fast becoming that man. I can no longer remember as well certain people who were key figures in my life. An aunt of mine, whose grave I visited, gave me a bit of a shock, only because I thought she was still alive. Another aunt of mine, buried somewhere in the middle of the graveyard, remains unlocated, simply because my aunt and I could not quite remember the exact plot number.

We are only the memories we make and hold. Perhaps just as importantly, our very existence depends on those who can remember us. Driving back to Kuala Lumpur, I can't help but feel distraught at the lives of those who have passed on, who remains as little more than vague memories in someone else's life, just like my family members who I had completely neglected to even remember.

According to Islam, Allah promised us three things: life, love and death. Taxes probably should be in there somewhere, but for now, that is a reflection of modern day society as we know it, rather than the bigger picture of our entire existence as we don't.

Someday, I too will die. What will happen after that? I suppose it's anybody's guess really, but I do hope that I will have left enough to at the very least encourage some people, if not to keep my own grave nice and clean, to remember me fondly enough for all the things I have done for them.

Have I deserved that? I honestly don't know. The chronicles of our life, the legacy we leave behind, these are things that we may not necessarily think of before, but these memories are the stories that will one day be all that become of us.