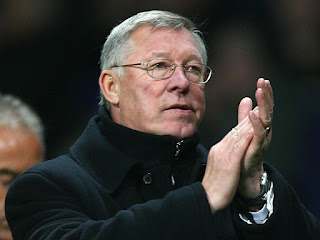 It was eleven years ago, give or take. I was doing my A Levels then at KDU, and it was a fairly interesting, transitional period for me. Later that summer, the World Cup of 2002 would be screened on the big screen in the cafeteria. Unusual? No, except that it was to become so bloody loud that you knew someone had scored all the way from the rooms where we were to do our A Level exams.

These are the years that you have somehow marked out as the key ones in your life. Looking back, of course, all the memories become more jumbled up than usual, but certain things, certain numbers jut out. 1992. 1999. 2002. 2006. They all stand out for different reasons, of course, but the sense of importance does not fade, even if the memories does.

That was eleven years ago. That was the last time Sir Alex Ferguson said he wanted to retire, but he did not. The apparent replacement lined up back then was Sven Goran Eriksson, amongst others. Imagine how that would turn out. This time, it would be David Moyes, a little closer to home and in keeping with the traditions of the club, hiring only managers from the British Isles.

Another number stands out: 1998. That proved to be a key summer in my personal life too, but within a footballing context, it was a bruising one. Manchester United lost out to Arsenal in the league, losing a particularly key game against them at Old Trafford. Marc Overmars was on fire that day, but then again, when you have a youngster like John Curtis tasked with marking one of the most rapid players in the league, you’re bound to have some problems.

A month later, Ole Gunnar Solskjaer, too, provided me with an inkling of the hero worship that is about to come the following year: as a Newcastle player counter attacked with only the goalkeeper to beat, Ole chased, caught, then hacked him down as safely as someone could be safely hacked down. Red card was out, but of course, it didn’t matter, and in the end, it proved to be futile in keeping our title hopes alive. What it did do, however, was to make us love him even more.

Love in a football context is not enough, however. It can be bruising and emotionally scarring at times. Looking at the years, some games stand out, again for different reasons. Barnsley, FA Cup, the late 1990s. I can’t quite remember which year it was, but it must have been 1998, as we had been knocked out by Wimbledon one year. That was an important game, marking the first time we had been knocked out of the FA Cup outside of the final for three years. After the match, Sir Alex went into the dressing room, and shook the hands of every single member of the Crazy Gang. A special word must have been reserved for his compatriot, Neil Sullivan (who, amazingly, is still playing professional league football), who performed well, but the whole occasion, more than anything, also marked out Sir Alex’s different side, the side that can be a great loser as well as a great winner.

Back to Barnsley, though. Here’s the rub: we didn’t have satellite television back then. For a while, we did, but my mother rationed the packages we were allowed to subscribe to. Hence, I would get my fill in time for Le Tournoi in 1997, but then my sister would get hers with the music channels, and my granmother too; she was keen on the Indian movie channel. Strange, but true, and so, I got used to listening to the radio.

I believe it was Radio 5 Live which broadcasted the game. Capital Gold also does live commentary broadcasts, and it was where Jonathan Pearce first made his name as a crazy commentator worthy of a job on the South American continent, but they tend to do only the London games, for obvious reasons. Listening to the games on radio is a different experience. You see the things happening, but they happen inside your head. The chances of them matching reality could be fairly low, but this depends on the familiarity with the subject.

I was very familiar with Manchester United, and such, what I imagined in my head, inspired by the commentator’s voice, usually matched what the reality would be like. It matched the goal that Barnsley scored against our injury ravaged team. As an indication, Brian McClair, Michael Clegg and Ben Thornley played, and I became a little too familiar with the disappointment that night, crying my eyes out.

Thornley was a highly-rated youngster who fell by the wayside due to injury. It was an unfortunate roadblock for him resulting in him leaving the club in the summer, but the defeat to Barnsley proved a bigger obstacle to the club winning anything that year.

Teddy Sheringham, joining us in 1997 after Eric Cantona retired, won nothing as a result of that. Winning things was his express objective in leaving Tottenham. As we made his way around the grounds in Engand, he would be greeted with chants of “Oh Teddy Teddy Sheringham, he went to Man United and he won FUCK ALL!” The next year he would indeed win fuck all.

But that year, we would win fuck all, in the more negative sense of the word, and the defeat to Barnsley was very upsetting for me. It sounds ridiculous now, and I smile as I write this, but I didn’t want to go to school the next day for fear of being bullied. I was bullied a lot as a kid, and a lot of it had to do with football. Some of it were to do with race, interestingly enough, but that’s probably a different story for another day. For today, memories about that night brings out a wry smile at how things have changed.

How things have changed.

The only constant is that things change. Of course, we know and accept that, but at times, it’s difficult to truly realise that. I don’t know how much of Sir Alex’s retirement as manager would be in the coming months and years, but hearing news of this made me feel like a part of my childhood is no longer around. That’s always a very upsetting thing, whether you’re a 14 year old kid listening to football matches on the radio, or a 28 year old man who was only two years old when Sir Alex took charge at Old Trafford.

Today, he will be taking charge of United on home territory for the final time.