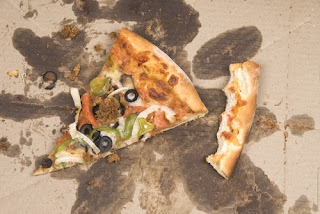 I met up with an old friend recently, someone who I had not met for quite a while. It can’t have been that long, but I actually got somewhat lost on the way to her house. To more specific, some of the roads were changed and/or blocked, but all the same, I had not figured them to change drastically enough until I couldn’t find my way around my own supposed backyard.

I arrived in good spirits all the same, if not quite in good time, and proceeded to have a pleasant conversation with both my friend and her mom. I’ve known them for quite a number of years, and it is always a pleasure to meet up with people from your past, especially those you really like.

In anticipation of my visit, they had taken the trouble to order some pizzas, so as to make it a more complete Malaysian experience (of course, we’re not the only country to do this, but no such experiences are ever complete without food of some sort). The only problem is, though, that the pizza took forever to arrive. They actually placed the order prior to my arrival, but even taking into account of my unplanned detour(s), they should have arrived a lot earlier.

Somewhat unhappy, my friend called to enquire about the status of the pizza, and whether they would be arriving any time soon. Here, dear readers, is where the issue began.

My friend is a Malaysian who, unless I am very much mistaken, have lived in Malaysia pretty much all of her life. She speaks English very well, with her pronunciation and cadences sounding all very ‘international’. She doesn’t, however, speak very good Malay. The person who took the call for the pizza company probably speaks Malay fairly well, but given the problems and issues about to arise, I’m guess her English is probably not quite up to scratch.

And so you can see where I’m heading here. Obviously, there is some problem with the pizza delivery service itself, whatever it actually may be, but in trying to solve a problem, most parties would usually come together and try to see what could be done to minimise whatever fallout there may be. But what if the common ground between the two sides is so small that direct and honest communication is difficult to carry out?

My friend’s mother then took over the phone. Her Malay is, admittedly, not much of an improvement on her daughter’s, and so the fireworks crackled. I looked at all this with much amusement, and wondered why it has all come to this.

It must be noted that I am not writing this as an attempt to point fingers at any given party. Speaking purely of the linguistic divide, English is currently the main international language utilised by pretty much everyone. There are many reasons for this, and the fact that the future may not quite be the same for English does not negate that fact in the contemporary world. Therefore, its study and usage is not something to be discouraged.

At the same time, Bahasa Melayu (and its variants) is the language used by the majority of the people in this region. As bastardised some of its origins may be (not unlike many other languages), learning and using the language used by a very conservative estimate of over 200 million people, especially when you have been born and bred fairly central to its region of origin, is somewhat useful, I would think.

Obviously, there’s more to this actual pizza situation than we know. The true story may never truly come out (did the delivery boy’s tyre blow out? Was he actually kept waiting by the customer prior to us? And why would the girl who answered the phone pretend to be the manager of the branch?), but all the same, as I see the two sides clash, I can’t help but wonder how we, as an entire nation, can move forward as much when there still remains linguistic chasms to be negotiated over something as simple as ordering a pizza.

There’s more to this issue than meets the eye, and a more complete discussion of the entire issue would have to wait for another day. All the same, it is not a particularly new topic, but it doesn’t mean that it’s not current. I do believe, however, that unless we make a more concerted attempt to address these gaps between us, moving forward and progressing as a nation is not going to a pizza cake (piece of cake). #thekol