Life Is That Bengal Tiger 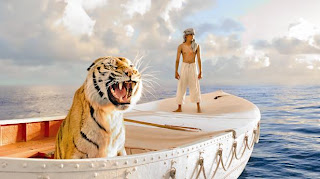 I eventually managed to catch Life of Pi, a film directed by Ang Lee and revered by many for a number of fairly obvious reasons. Great performances from its actors, a number of visually astounding sequences, and the very fact that a junior of mine worked on the film, a fact I popped big for when I saw her name on the end credits list.

Putting that aside, however, I am keen to explore further one of the main central ideas of the film. It should be noted that there will be spoilers in this particular write up, and so you should probably take the time out to see how this particular story played out.

The key word there is story.

One of the main ideas throughout the film, subtle though it may be, is the concept of religion. The main character is portrayed as someone who is interested in a number of different organised religions as we know it, and he does a little exploration and experimentation of his own when he can. While this may have confused some, what it did do was to add up to a fairly well-rounded and complete character, at least from that particular aspect.

Near the end of the film, however, it was explained that perhaps everything is not quite what we may think it to be. The method of exposition is key, too, for in this scene, the explanation was done in one, long, single take. This is not a film post, per se, but generally speaking, the power of fiction lies in the filmmaker being able to manipulat a bunch of different shots, takes and angles into a fairly coherently-edited narrative sequence.

In essence, the longer a particular shot is, the more ‘real’ it is, because it is not quite so chopped in comparison to the other scenes. This reduces the power of the filmmaker somewhat, but if his intention is portray reality as much as possible, that the long-duration shot is a tool available at his disposal.

That was the tool utilised in this scene, and that was the reveal of the film, so to speak. However, this particular reveal negated the story as it has been told thus far up until now. What was told was pretty fantastical, but it was told, and it was what the audience, including me, lapped up. We allow ourselves to build that bond between us and the character, and believe in what was presented before us.

It is, in many respects, about as close a metaphor to life as I can remember witnessing in a film.

In essence, our sense of identities came about from what we are exposed to. This could be in the form of people actively trying to inculcate within us certain things, like teachers teaching us about mathematical equations, and our parents talking to us about religion. As time goes by, and we attain a certain degree of perceived expertise in whatever fields we may have an interest in, the inculcated becomes the inculcator, as we spread our own ideas and ideologies to others as well.

That is not necessarily to say that we basically regurgitate what others tell us. Far from it, for I do believe in the power of free will. I think we have the ability to take our time to think things through and consider them from different angles; whether we actually use this ability is probably a different story, but the point remains that these things we are told, these stories, they form the very foundation for the meanings we make in life.

Again, these stories do not necessarily have to be fake. The term story itself is often associated by many to be unreal, but there are true stories. Nevertheless, these true stories are always mediated to us by others. For the most part, we are not there ourselves, to witness the sequence of events unfold before our very eyes, but the accounts of others are accepted as gospels of truth because what happens there is the story told fits in fairly well with what we know, with our own stories. They can help to either enhance or change what we know, but it doesn’t necessarily change the fact that these stories are absolutely paramount in forming us into who we are.

In short, we are the stories we tell and are told. We have a choice in believing which of the stories we are told (free will, remember?), and that choice usually reflects the stories we have already been told and have a stake with, stories with which bonds have been created.

At the end of the film, the main character asked which of the two versions of the main story did the secondary character, a journalist (a storyteller of in his own right), believe in. One, a fantastical journey with a Bengal Tiger that can possibly exist only the imagination of the few. The other, an equally sensational but a blander retelling of the sequence of events.

The man replied that it was with the Bengal Tiger. The main character smiled, and said, “And so it goes with God.”

Life is that Bengal Tiger.