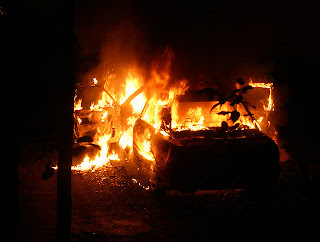 Three words. That’s all it took for me to fully understand, a phone call that started without the usual pleasantries. Then again, there’s nothing pleasant about the ending of a relationship, even if it is something that’s becoming more usual than otherwise.

I closed my eyes, letting out a soft sigh that confirmed my surrender. The letting go of the entire body to the universe, the moment when you realize that some things, some things are just beyond your control. “I’m sorry, man.”

Those three words were the only words that came to mind, certainly at that moment, at least. What could you say to someone who had had a whirlwind of a romance? Who proposed two weeks after the meeting, whose happiness was something I had not witnessed for a long while? I had my misgivings, but I realised that those were nothing more than the devil whispering misleading doubts in my ear. My role was clear: I am the friend, and I am to be there for her. This is not about me, it is about her.

“I know.” Pause. “I needed a friend, that’s why I called you earlier.”

A little context: she had tried to call me earlier, but with my phone safely embedded deep into my bag, I had not attempted to stop my driving to answer it. I was on my way to Kedah, to visit my grandmother. Eventually I did stop, to double check on some things about my car, and eventually I did get around to calling her back.

“Well, perhaps this is not the best time for me to say it,” I started. Nothing else came to mind; whatever words I could use to comfort the unconsoled, I shall try it nonetheless. She needs a friend, after all. “But you and I, we’re the lucky ones.”

It is true. Love comes and bites us, and then gives us a little more, before it swallows us whole. Yet the feeling when you are in a relationship with someone, that feeling is unbeatable. It is a high that only the drug that is love could give. It’s the sensation, knowing that the kind of things that you’ve always wanted to do is within your reach, to imitate from the movies, to relate from love songs since time immemorial, to fully express the you the way you intend to, to hear the birds chirping just that bit louder the morning after…that is a sensational feeling that mere words could do no justice whatsoever.

The bump that comes after, the drop that precipitates that sinking feeling in your stomach and paralyses the body, that feeling is unpleasant, to say the least.

But the high is worth the price. Or is it?

“We’re the lucky ones,” I continued, “because at the very least, at a very fleeting moment in time, we were the ones in love. We were the ones who the other thought of the first thing when they wake up in the morning. The one whose always on their mind, the one who always makes them feel warm inside, a feeling that no one else could give them at that time. For that moment, at least, we are…” I paused, considering the order of the words, before I gave in once again to the universe, “…we simply are.”

“She wants to marry someone else.”

I bit my lip. Perhaps, then, that wasn’t the wisest thing to say. Then again, I knew better than to beat myself up. The context required was not given for me to make more sense of the text. I had caught wind of the news, but I’m not the kind to give credence to the words of others. For that one moment, I wish I had paid more attention a lot earlier.

A few more moments passed. “Listen, I don’t know what else to say,” I started again. I was honest before, but if possible, I couldn’t be any more honest now. “You know I’m here for you, and I’d dearly love to be with you and give you a hug more than anything. But I’m on the way to Kedah now…”

“I see,” she interrupted, taking the lead for the first time in the conversation. “I understand. We’ll meet when you get back.”

Pause. “You know,” I said, “I could name a bitch in my film after her. Just for you, I would do that.” I imagine her smiling, ever so slightly, at the other end of the line. That’s the advantage with being a filmmaker: the world you immortalize is at your mercy. “You give me her full name, and we’ll call it even. Or as even as it can be.”

Soon after, the call ended, and I continued my journey northwards of the country. My mind was still fraught with the situation, considering the ins and outs of it all when I saw a plume of smoke rising in the distance, becoming thicker as I get closer to it. The number of cars that slowed in front of me to a crawl certainly indicated that something was wrong up front, very wrong.

I soon saw the cause of the crawl. A Mini Cooper, one of the older models of the classic car, was on fire. It was literally engulfed in a very angry flame. There were people around it, but I could not make out whether there were people inside it or not. The emergency response teams surrounded it, trying to get the situation under control.

I eventually drove past it all, as I slipped into the smoother traffic that would take me all the way…home.

It may not be directly related to the issues at hand, nor does it cure the heartache of a breakup.

But in so many ways, sometimes we really are the lucky ones.