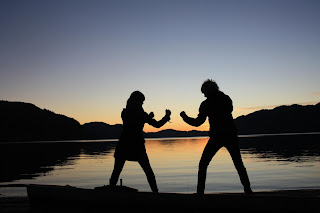 He felt the wind of the punch first, lightly warning him before it landed itself on his cheek with significantly less subtlety. Jayken staggered backwards; he had parried the newcomer’s attacks with grace and power, but this particular question had no answer.

Certainly not one that could protect him.

He shuffled backwards on his feet, trying hard to maintain his stance. A step outside the squared circle lined on the ground would be fatal. He’d lose a point, but he’d lose a lot more than just points. They're mere nomenclature when the rest of the class is watching on and backing him. He’s their leader, the superstar of the grade. He can’t afford to lose to…

…actually, just who exactly is that guy?

Standing at just over six feet tall, with a dirty blonde style to match, the newbie checked in without much fanfare. Having recently transferred over from the Koobcamian district, there shouldn’t have been much reason for a fanfare, either. That district hosts the dropouts, the rejects of rejects, people who had wanted to join the Academy, but had failed some of the pre-requisites. Some do eventually manage to make the jump, but even fewer actually stayed, unable to withstand the intensity of the Academy.

That is why Jayken is widely regarded as the special one amongst many special ones. He is tough, but fair; calculating, but calm; ruthless, but friendly. Those are very uncommon characteristics to be found within a single person, let alone one who desires to become a soldier for the Federation. As a result, he has been put on one of the fast-track programmes, intended to speed up the graduation of super soldiers to help with the war effort.

So was this dude here.

Jayken stepped gingerly towards the centre circle. The guy pulled back the strands of hair covering his forehead; if he were to fall out from the Academy, he’d be one of the major teen idols without much effort. His green eyes is radiant with intensity, but that betrays nothing more than his inexperience.

Jayken immediately rocketed off his feet, using his knee to aim for the guy’s head. That shot was parried, but that’s OK, for his left knee simultaneously came up to score a similar hit. The stranger parried that one too, with both arms actually managing to hold on to his knees mid-air. Jayken brought his hands, and bopped him around the head, ringing the guy’s ears long enough for him to release his grip of the knees. Falling exactly how he had intended it to be, he crouched and swiveled on his heel at the same time, sweeping the guy’s legs off the floor.

Well, that was the plan. The guy jumped with both legs, while his hands are still holding on to his ear. That hit should have affected his balance, but he showed no signs of it as he spread his legs and immediately caught Jayken’s head with the inner thighs. Jayken realised the hurricanna attempt, but had no time to react to. The stranger, with Jayken's head clamped tightly between his thighs, arched backwards and flipped Jayken up, bringing him overhead as he did so, and slamming him, back-first, into the ground.

The next thing Jayken knew was the guy being pulled off him, with his arm raised in victory. “Winner!”

The hall fell silent, not knowing how to react. Jayken got to his feet quickly, even though his body protested. He threw a glare at the guy, but softened it once he realised the contest was truly over. He had lost, fair and square, to a better opponent. These moments are rare, and these are the moments that should be remembered, so that they shall not be repeated.

“Congrats, man,” said Jayken, removing his handpad and extending his grip. The stranger pulled his hair back once again, immediately after removing his own handpad, and gripped Jayken’s outstretched hand with his own. “That was pretty good.”

“Thanks.” The grip was harder than Jayken had thought it would be; his own grip was naturally strong, but this guy is…something else. He released Jayken’s hand and turned to walk away.

“Hey,” Jayken couldn’t help but raise. The guy turned slightly, his face half-shadowed by the warm lights above. “Jayken.”

There was a pause, a moment to be sure, nothing more, but it felt longer than that. “Kye.”

And with that, he turned back, and left.