Kind of You, Sir 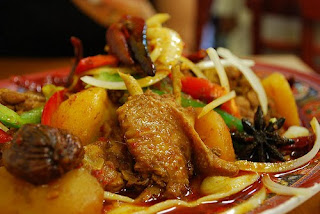 “Stick to your own kind, man.”

Friday night, Bangsar. Dinner at one of the restaurants that sells noodles somewhere inside Bangsar Village 2, though for the life of me the name of the place escapes me. I did remember that we were allowed to scribble on the paper cloth that covers the table. A novel idea, one that my friends and I embraced as many highly-educated urbanites would do: writing the word ‘stupid’ and drawing arrows from it leading to each other.

Just as predictably, Bangsar would also prove to be the kind of place where the lovely ladies of Malaysia seemingly converge in. The comments that commonly follow revelations of my foreign stints largely consist of, “So, Korean girls hot ah?” (or something of that ilk). My response (“I appreciate all women”) can be decoded as such: Malaysian girls are just as hot, and just as beautiful as any I’ve come across in my travels.

So it was that your good self was sitting quietly and noticing the lovely lady seated behind my friend. “Dude, your 6 o’clock,” I mentioned quietly. He turned and had a discrete look, more in passing than anything else. That was more than enough, however, to register her beauty, and I had thought that his next comment would be something that would praise these shallow aesthetic qualities.

“Stick to your own kind, man.”

The comment stung me a little, because in all honesty, her ‘kind’ wasn’t immediately obvious to me. I later considered whether ‘kind’ in this respect meant anything other than race. Nationality? Perhaps, though once again, it is a slippery concept. Class? Well, I’m not rich, but given that I willingly and gladly paid for dinner that night, I’m blessed to not be struggling in that department. What else then if not race, an issue my friend has always taken to his heart?

I have a weakness in that area, in being able to tell whether someone is of a particular race, nationality or creed. In addition to my appreciation of beauty, this was also something that came to me in my travels: not to take things for granted. While this applies to things like wealth and comfort, I take this one step further, and literally learned not to make assumptions. The lessons I learn, I intend to remember.

That basically means that a person’s ‘kind’ doesn’t directly register with me. I can’t really tell who’s what anyways. How can you? Look at how mixed we are. I recently met a TV personality who said she wanted to work with me. I’ve heard of her before, but am not particularly familiar with her work. Googling her, I was surprised to find that she’s half Irish. I wouldn’t have guessed that in a million years, and I lived in that part of the world for a good and influential portion of my life. I should know, and I didn’t.

Kinds, after all, are nothing more than the genres that we ourselves create to simplify the world, right? Understandable, but not quite agreeable. We, the urbanites of Malaysia, the people who have studied in Canada, England, Australia, who have become lawyers, accountants, bankers, filmmakers working for multinational entities, owning cars more expensive than my grandmother’s house…still see the world in the same terms as the beggar down the street, as the boy who never left the kampung, as the foul-mouthed, low-rent people we call politician.

There’s something wrong with that picture.

All this came to a head much later on. I buried it down, not wanting to ruin the occasion; it’s been a while since I last saw them, and our friendship stretches back across the past decade. There is also, of course, the slight possibility that I could be more than just a little wrong (and later during dinner, something else happened that gave me even more food for thought, beyond the pho in front of me).

I will, however, agree with him on that one point in one way. I wish I could replay the entire scene.

Then I would tell him, “Yeah, I will. Human being.”

Anonymous said…
why am i not surprise upon ur friend's reaction? It somehow reflect the effectiveness of our education system implemented by our so-called visionary politicians for years and years. Anyhow this blog of yours is written so nicely and beautifully that i cant resist to read every post. Good luck in ur career.
1:29 AM

sam said…
The place is called Canoodling :)
I enjoyed reading your blog. Btw, we've met after your screening at Annexe last week
2:05 AM