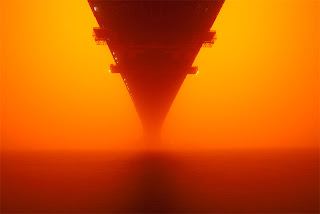 Kye stepped off the ramp almost as it finished its descent, touching the red earth. The winds of the valley swept up the dust and sand, making it nearly impossible for him to see with his own eyes. He had wrapped a shawl around his head, the turban-like concoction looking like an onion plonked on top of his head. A white onion that will get very red, very soon.

Kye had on his Nari-V goggles, designed specifically to help military members see under almost any condition. The makers were very meticulous with the design and the make of the goggles, claiming that it will work under any condition. Obviously, they did not do their field testing in Loues. A barren, dusty planet located somewhere near the Outer Regions, it's testing weather conditions, remote location, and the lack of life makes this the kind of place that only the blind would be able to see.

A perfect hideout for someone who's looking to keep away from prying eyes. Kye, however, doesn't give up easily.

As his feet trudged through, stomping the ground, the ramp on his fighter pulled up, and shut with a resounding hiss. Some of the sand had gotten in, and it would be there for a while yet. If all goes well, Kye won't be returning to his ship for some time. He has a personal mission to accomplish here, a very personal one, one that he hoped would help to quell the unease he feels within his heart.

He had been walking for hours, going against the stream. The red dust swirls around him again, with reckless abandon; at one point, he was nearly slammed off the ground into the ridge next to him. It took all his might and energy to ground himself without having to truly crawl on his belly.

He felt the red earth crumble from between his fingers. Grasping unto to something, only to have it slip away. Isn't that the very definition of despair? To have been so close, and yet so far? Letting it slip would have meant torture for his soul, because of the knowledge that what he wants is so close to being a reality. Most beings in the galaxy do not find themselves in such situations. They do not aspire to be more than they truly are. The items that they do stretch and grasp for are no more than mere shelves above their head. Forever they shall remain that way, forever they shall remain nameless. They will not have played a significant role in the changing of lives, and the galaxy will not know and care for them. If acknowledgement is truly the first condition of existence, then they do not exist.

Kye wants to exist. He wants to change the galaxy. He wants to bring peace and stability to worlds beyond his own, to be more than just a fighter the confederation has trained him to be. To die a lonely existence like the many and those before him is out of the question. To leave without leaving marks...what is the point of your existence, then?

He had read of how the old masters of the past had conquered this world, but this is ridiculous. His once-smooth skin now seemed to take on a permanent red sheen, while his throat felt rougher bit by bit, almost by the minute. His water supply had run out some clicks back, while the food he had left dropped into the ravine as he tried to cross the bridge. He had not seen that the small gap in the bridge was covered by caked dirt and dust; the small amount of pressure his foot applied to it gave way instantly. His heart felt like it's about to burst forth from his throat, such was the change in gravity. It was also gravity that claimed his food, leaving him to curse as he sees it swirled by the wind all the way to the bottom.

This is too much. Now he is indeed crawling on his belly. Or rather, he is dragging himself across on his belly, clawing his way forward. Thankfully he still had his sensors; without that he would have been truly lost.

Perhaps he was already lost to begin with. It was keyed in with information that he had gathered during his research and investigation. Perhaps those information had been wrong to begin with; maybe one should have sought for more beyond books on unconfirmed legends? Maybe. Then again, that was all he had to work with. What if they were all wrong? What if Kye had keyed in the wrong coordinates? As he continued to move, one grip after another, he wondered...what if...

His hand felt something cold and metallic. Immediately, he perked up, his senses alert. His body screamed in agony at the sudden change in state, but as he stood up, it also complied with the training it had gone through.

He stepped closer towards the source of the surprise. He rubbed the metal lightly and gently, and realising that more could be seen, scrubbed the dirt furiously from the metal plate. It bore a certain graphic, a sign of some sort...

He took out his sensor, and glided his way through several docs. His heart beating faster and faster, he came to the right one, a doc with a roughly drawn picture. One could almost compare it to a picture drawn by a child, but one would not do so knowing that it was a written by a tough Napaj who also happened to be drunk at the time.

The drawing and the sign on the plate was identical. One could sense the sigh of relief that he exhaled. It was a mistake, because by naturally inhaling, Kye accidentally breathed in more of the red dust than he had wanted, and coughed, each one killing his throat and abdomen as it is.

Nevertheless, the sense of hunger and exhaustion was momentarily forgotten. His gloved finger comes up adjust the setting on his goggles. His eyes sharpened, scanning the horizon for...there.

A dark, triangular structure in the distance. There's still some clicks to be covered, but his heart whooped with joy nevertheless, strengthening the blood flow with excitement. He felt it reenergise his body, and this time he stood up defiantly, against the wind. The second wind comes as the goal, however distant it may be, is in sight. He smiled, and started walking.

So far, and yet so near.