To Russia With Rubles 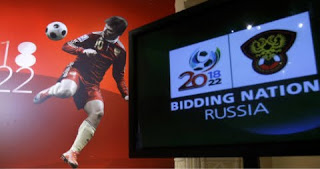 So it's Russia, then.

My initial reaction was one of some measure of joy. I have to admit, it is an incredibly ambitious decision by FIFA to have selected Russia as its next host for the FIFA World Cup. The federation has been on quite a roll, selecting a number of newbies to host arguably the biggest sporting event for a number of tournaments now. Following on from South Africa this year, let's not forget that Brazil will be the host in 2014. Qatar in 2022 will be a new adventure as well.

For my part, I'm always up for a bit of adventure, whether literal or metaphorical. I followed the announcement with a deeper interest than usual, partly because the previous edition only had Brazil submitting a bid to hold the tournament, so the element of drama was missing. Here, there was tension, build up, perceived villains in the forms of media exposes and corrupt officials, with a twist in the tail. After all, Spain/Portugal was expected to have been in the mix as well, so the presence of a number of very credible potential hosts made for an exciting event. Plus, with the announcement of the 2022 hosts to be made as well, we get double the drama.

More importantly, however, by 2018 I think I would have been more established as a person. More settled, more financially-secure, more able to do what I want to do. In short, when I blow out the candles of my birthday seven and a half years from now, I fancy doing it in a World Cup-hosting country at the time when they are actually hosting the World Cup.

I say this because it is an experience that is worth experiencing. I have spent some time in Korea, where people go absolutely crazy during the World Cup. The experience have often left me wondering what it would be like to actually be in a country that is hosting the World Cup. You can't buy that kind of excitement, certainly not in Malaysia, with the number of plastic fans that populate the mamaks every weekend or so. The people who support their country, who cheer for their players, do so genuinely. Malaysia's participation in the Asian Cup a few years back gave a good cause for people to attend competitive tournament football. Of course, the quality of our own footballers leave a lot to be desired, but the reaction of many of my friends left me wonder whether we'll ever be able to put all these things aside and watch football for the sake of not just the nation, but for football. “I don't want to waste my money. I'll wait for them to improve first, and then I'll go and watch them.” I still remember those words, and wonder what wasting money is to people who spend their weekend drinking away money that would have quadrupled the ticket price at the time.

Which leads me to the concern of Russia. Yes, Russia will host a nice little World Cup, which is already a lie. Their World Cup will be anything but little. In case you don't know, it is a big country, and it will take some effort to cover the distance between the respective stadiums if I do decide to follow England (FYI, I support England and Korea for reasons of familiarity and symbolic umbilical cords). Russian cities make regular entries into lists of the most expensive dwellings in the world, while other costs will surely not just pile up, but be also jacked up as if cartons of Red Bulls had been spilled into the computer that decides ticket prices.

Of course, that's overstating things. However, after the euphoria and pleasant surprise had died down, after the climax had passed, I sobered up to the potential costs. Who cares about racism and corruption if it costs more than your life to go there to begin with? I better hope that Spielberg comes through a little quicker with his 'Transformers 5' offer. For now, we'll have to adopt a wait-and-see policy.

Well, that's a lie. For now, I could exercise a few demons, and open up a game of FIFA on my computer. That I did, and controlling different teams in different halves, England vs Russia proved to be a more interesting affair than usual.