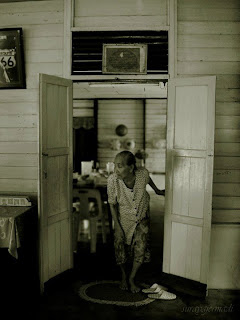 It seems that it has been a long time since you were truly able to remember my name. Perhaps it has been even longer since you can recall, off the cuff, whose son I truly am. And espite the fact that it has been a decade since I left school at 16, you asking whether I am still doing my SPM for time to time never did annoy me.

“Dia dah tua Hakim, faham je lah...” was the words of advice from Acik, who would listen on from the next room whenever you asked me who I am. Herein lies a funny fact: I have a short temper. Surprise surprise, some may say, but here's another caveat of sorts: I get really annoyed when people talk to me about the same things over and over and over again. Even more so when the questions asked are identical so as to have their own previous. It gets under my skin at times, and it doesn't help if those are the kind of questions I'd readily classify under 'stupid'.

But I never got angry at you. I was never annoyed, as far as I could recall, and I was never truly upset in any way whatsoever. Of course, our memories may distort the real history as it actually was, but the fact of the matter is, when I do think of you, all I could think of was...cats.

I remember that you used to have lots and lots of cats. It was one of the biggest pleasures of the balik kampung trips (that, and the fact that the back of the Pajero would be turned into mini homes for me and my sisters, complete with pillows). One by one, they went away, some of their own accord, others less so. Alang, the most memorable one of the lot, was probably the one you loved the most. “Kucing haiwan kesayangan Nabi,” you kept telling us, over and over again. I suppose I could attribute my love of cats to you in that way, because when I was younger, I wasn't allowed to have my own. Yaya and Adik had/has asthma. It comes and goes, but Adik did well enough to keep her own hamster. It was a decision I initially greeted with some disdain.

Just now, when I tried to park the car, a cat was lazing about in the driveway. I got out of the car after it refused to move when I flashed the lights its way. It didn't even budge when I poked at it slightly with my foot. Instead, it just meowed. I smiled, and lifted it well out of harm's way. I thought of Alang, and I thought of you.

We rushed back when we heard. I spent my time inside my boss's darkened room, trying to digest the fact, and then I told Syahirah. She took it badly, and it was then that I teared up. That, in addition to when I told Mak Minah, was the only time when I cried. The rest of the time, there was a deeper realisation that you're in a better place. The last few times I saw you, when you couldn't move or talk in the same way as before scared me. It hurts me to see and think of you in that way, and I must admit that it was a blessed release. I tried to encourage Syahirah to see it that way, for the memory she had of you was more pristine.

Syahirah. Suraya. Me. Fazly. We are your grandchildren, we are your legacy. Yours and Arwah Tok Murat's. Syahirah and Fazly couldn't come, but we came back for you. Bapak and I kissed your forehead, after having unwrapped you for the last time. The wrapping was nicely done, but after we untied it, Bapak couldn't quite figure out how to tie it back exactly the way it was before. It was one of the few times I have seen him flustered in recent times. It betrays his outward appearance. Sometimes I question his judgement and handling of you, but deep down...I know. He knows, and you know.

Yaya wrote that you're now dancing amongst the stars with Arwah Tok Murat. Dance well, and rest in peace, Atuk.

Anonymous said…
My condolences on your loss.
9:23 PM