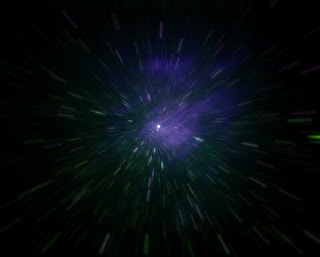 The scenery flashed past them. It's not much of one, to be honest: merely white stars flashing past against the blackness of space. Space was once the most romantic of frontiers, its unknown quantity and quality enthralling generations. Just like everything else, though, once it is attainable, it is no longer appreciated as much, if at all.

Airus Kelic never lost his sense of wonder for space, though. He made sure never to lose that, because it represented to him the freedom which he had yearned so long for. It's not easy to be a pilot in the Confederate Flight Wings; it's even more difficult to stay alive and remain one.

Next to him, Myrawani slept soundly. Her eyes fluttered, almost as if she's having a dream. Airus wasn't sure if it was a dream. Myrawani is not well. She suffered previously from lung cancer, and thought she had fought back at that time, it appears as if some of the symptoms are back. They went to check it out together, and the doctor didn't have good news. The kamala extracts can only do so much, repressing and inhibiting as much of the symptoms as possible. It wasn't something that was legal, but the doctor understood. The Hippocratic oath swore him to maintain all life and all costs, legally or otherwise.

That's why they are where they they are now. Airus knew of someone who had modified the extracts, making them more potent. The journey to the planet of Arahas, however, is not one that can easily be navigated on autopilot. The Malsi system is a rocky one, and Airus had to navigate the Nari shuttle as deftly as possible, plotting minor jumps here and there. It's as much to do with keeping them alive as it is to not disturb Myrawani too much.

Airus cast a glance over to her. A strand of hair had fallen across her face, freed from her neatly coiffed hair. It's beautiful how natural it all seemed. That was one of the reasons why Airus fell in love with her. It was her simplicity, sincerity and naturalness that attracted him to her. In a galaxy filled with ever more complex peoples, it was something that appealed to him: to have something real to hold on to.

To have someone real to be with.

He reached over with his left hand, gently pushing the hair back into position. He tried not to actually touch her, but the tip of his finger grazed ever so softly against her forehead, her pale white skin....

Airus frowned involuntarily. He touched her face more deliberately this time, but still in a delicate manner. He then spread his area of contact, reaching across all her forehead. He reached down to her neck, feeling for a pulse.

He felt his own body go cold, almost as if the lack of heat from Myrawani was being transferred through his touch. She herself seemed peaceful enough, but though Airus remained cool on the outside, his insides were boiling. He fought hard to retain his control; his lips quivered, but beyond that, his mind raced to think things through. Rational, not emotional. The physiological reactions, however, were not absent; every fiber of his being was on its own end. That phrase has been used so many times, but here, it seems like every nerve he has were straining and standing on its own end.

He pulled his hand away, forcing himself to look straight ahead. Ahead of him, there is nothing but the blackness of space with streaks of white light on either side. There's nothing there but the empty vacuum of space, an endless space that is not as wonderful as it was.