Less is More, More is Less 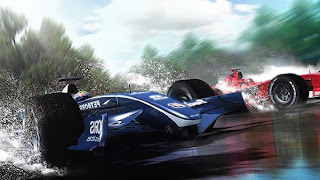 There's something that's not quite right about this year's F1 season.

There's plenty right about it, of course. At the top of the field, we have a number of genuine championship contenders going at it hammer and tongs. That's the minimum requirement for competitiveness, despite the technology and the promotion that proclaims the excellence of whatever the science boffins behind the scenes were doing. F1 for selling more cars, for creating a brand, for improving layman car's technologies promotion, for marketing for blah blah blah. Nobody cares about that; Audi and Volkswagen's not suffering for their lack of F1 involvement. Technology that trickles down into the consumer cars may appear to be seductive, but in truth, it's a mere by-product, an afterthought, of, “Well, we've created this, what will we do with it?” No serious F1 designer thinks of the company's future car designs when they're designing this year's chassis or the next. You don't stake millions of dollars for an afterthought; Jaguar did that, and ended up being made fools of. You go to race, not to promote something. It's ultimately all about the championship. McLaren vs Red Bull, Button vs Vettel, Webber vs half of his own team, with Ferrari lurking in the shadows to gobble up whatever points they can.

Moving slightly further down, we see the interesting presence of Schumacher and Rosberg occupying the upper midfield tier. It's not too surprising; last year's success was largely achieved in a stellar first half of the season, a first half during which the research and development funded by Honda the previous year was clear to all. The money dried up in the second half of last year, limiting the research and development of this year's car, but in spite of that, they didn't lose too much. Take that with you, and know, know that they're working their arses off for next year as well, and Mercedes is having a pretty decent year. The same applies to the newbies such as Lotus and Virgin, whose efforts at not being lapped too much surely deserves some applause at least. The only disappointment is HRT, who appear to be completely hopeless at times.

But no, beyond that, beyond all the races we've had this season, beyond the pleasure of Mark Webber flowering into a championship contender, beyond Hamilton and Button being competitive but fair...there's something else that's not quite right.

That something is the championship table. Or rather, the points accumulated thus far.

As it stands, after eight rounds of the championship thus far, we have three drivers who have already penetrated the 100-point barrier, with Alonso and Vettel a single victory away from joining the club. A look at the constructors table, and we'll see that Red Bull already have more than the championship-winning Brawn GP did for the whole of last year with not even half the season gone. That's what's wrong with this year's season, the bastardisation of the points system.

The new points system was put in place earlier this year, with the idea of spreading things out a bit more so that more of the teams will be able to get in on the act. With that in mind, it the points-finishing positions were extended from the top eight all the way down to those in tenth place as well. The problem here is that as it stood at the tail end of last season, it is not an easy system to configure. Then, the top-8 system was itself conceived with similar purposes, but with the implicit aim of reining it Ferrari's dominance at the start of the millennium. It was only the top 6 then who would be rewarded with points, with the winner having 10 points and 4 more than the driver finishing in second place. The gap was narrowed to two points when the second-placed driver gets 8 points, but at the same time, it didn't really cannibalise the value of winning a grand prix. The gap may have been reduced, but it's still worth it to go for victory, because that extra two points is a big enough gap to fight tooth and nail for. It's worth winning a grand prix, then, not just for the winning, but for the advantage of winning.

The problem started when the governing body wants to grant more points to more teams. It's seen as a way to encourage the midfield and the new teams, the likes of Campos Meta (HRT), Lotus F1 and USF1 (who at the time still had a small chance of making it). It's nice to get more points on board, to show the sponsors that it's worth pumping their money into the sport, into the smaller teams. Let's spread the pieces of the pie around a bit more.

The easiest solution would be to implement a 10-9-8-7-6-5-4-3-2-1 grading system for the top ten finishers. However, you can't really implement a system that eats away the advantage of winning a grand prix further. It's a point difference, but there's not as much point in winning if it will only get you a single point advantage over the guy you lapped in 2nd place. What they decided to do was the increase the prize for winning. Winners now have 25 points, and the subsequent finishers would have 18, 15, and so on, all the way down to tenth place. The guy finishing in 5th place now would get the same amount the winners would get for the past few decades.

This is wrong. It is wrong because it made a mockery of the past years of the championship. Points have always been used as a way of objectively measuring a persons' greatness or achievements in sports. There has been changes, of course (the first official races in the 50s rewarded only 8 points to the winner), but they have not really been as radical as this. This is not just true of Formula 1, but also of all sports. Football also changed from two to three points for a victory some time ago, but that was a sensible one: rather than trying to reward those who finished 2nd or 10th, rather than spreading the pie around, it made going for a victory all the more attractive. And where would American sports be without their point systems? Once again, changes can be noticed here, as well as in other sports throughout the ages, but the point I wish to make is that the points system for Formula 1 is too distorted. The idea may be to spread the wealth a bit more, but it totally made a mockery of the history of Formula 1. Records will fall even quicker; Michael Schumacher's career total of points would be less impressive in light of the new system. How would you then measure the Sebastian Vettels and Robert Kubicas of the modern day to the Prosts and Sennas of yesteryears? The comparison may already be a stretch to begin with (different equipments, technologies, etc.), but now this makes any sort of comparison totally impossible. They have to create their own history, and forgo the past sixty years, because the rules of measuring progress, of measuring success have changed too much for it to be relevant.

“But it has been fun and exciting,” some of my friends have said. “There are more drivers at the top of the championship who have a real chance of winning it.” That is true; as it stands, a single victory (and a couple of DNFs for those in front of him) is all that separates fifth-placed Robert Sebastian Vettel from taking the lead. But I'd argue that this is because this year, the racing has been good. The cars have been good, the drivers are on top form, and the drivers in question has stepped up to the game. Hamilton and Vettel have more experience that will benefit them, while Button seems to take to being a champion like duck to water. Webber also grew in stature, knowing at the start of the season that this may well be his last chance to drive a top-level car in F1, while Alonso is always lurking in the background, pinching points and the odd-victory here and there that he can never be discounted. Further down the field, the likes of the Force India and Torro Rosso drivers have also made hay while the sun shone.

But like I said, all of the above has been because the racing was good, rather than the points system being changed. I took the time to measure this year's performances to last year's system, and it shows that nothing changed. Hamilton would still be leading with 44 points, with Button and Webber both having more than 40 points, while Seb Vettel (now level with Fernando Alonso on 37 points, though Alonso remains ahead because he obtained his win earlier) would still be only a victory (and a couple of DNFs from those in front of him) away from reigning at the top. Force India would have had 8 points, which would have been respectable, though my favourite team Williams dropped further off the pace, going down from 8 points to a mere single point. The championship would still be exciting without the table looking totally ridiculous.

All in all, however, the changes due to the points system has been minimal. The intention may have been to spread the pieces of the pie further, but teams like Lotus and HRT will never get points on mere merit and speed alone, while Williams wouldn't be able to mask the frankly horrendous season they're having. The points system used last year was the best possible compromise. All the new point system has done is to distort this year's championship beyond context and recognition; at this rate, a haul of almost 260 points will see Hamilton claim the championship, while McLaren will have over 500 points come the end of the season.

How fucked up is that?

Anonymous said…
Sorry for my bad english. Thank you so much for your good post. Your post helped me in my college assignment, If you can provide me more details please email me.
3:59 PM

Fikri said…
Glad I could help, but you'll have to give me more details about how to contact you, mate...
5:16 PM