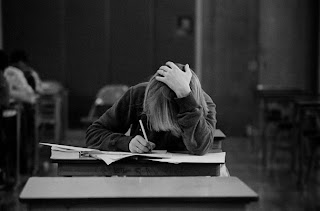 The night's clouds gathered above me, though for now at least, they lay unmoved, unstirred by the events below. My friend was driving the car, while his housemate was in front, half-heartedly engaged in a half-hearted effort to discuss the directions of Jeonju. We were on our way to my friend's friend's house, who decided to christen their house, and meet me for the first time. My friend had been talking about me for a fair amount, in glowingly positively terms, and it stoked their curiosity. So they wanted to meet me.

My attention is not on them, however. I was told of the release of my sister's high school exam results. It is a highly-anticipated and long-awaited highlight, even if the time gap between the actual exam and the release of the results is not that big. I've done a Korean proficiency test before, it took almost three months to release. OK, perhaps it's not that long, but still.

My father had informed me some time ago that the Little One (my youngest sister) had received her results. He mentioned it almost in passing; that's one of the things that upsets me a little, being out of the loop. You'd expect to be kept pretty much in the loop even when you're away, but even then, there are still many, important things that crept through the cracks. Things like exam results.

Out of sight, out of mind. Perhaps Soderbergh should make a sequel to his film to that effect. George Clooney is still a bankable star these days, while Jennifer Lopez still looks good, even if she has been involved in some career-killing bombs recently.

"You did really well," I told her, still considering the right words that could lift her spirits even higher. There's no embellishing on my part here, for it is the truth as I see it. "You did a lot better than me when I was at school. Listen, Little One," I paused, wondering whether to reveal the big secret of academic life that many parents wouldn't really want their children to know, "the truth is, in a few years, nobody will really care about what you did or how well you did in school. It's true, it's important, and we have to work hard for it to get as best a result as we can get. But," heavy emphasis on 'but' here (perhaps I should write that in italics) "the fact is, it is a stepping stone to the next level. Having good marks are important, but it's all it ever is: marks. There will come a point in time when you'll look back and see that all the worrying and being upset about it is not really worth the time and effort."

She murmured an affirmative, perhaps more to get me to shut up and off the phone so she can go into the corner to sulk a little bit more. A short while later, having tried my best to do so, we ended the conversation, promising to keep each other up to date as to the date of my impending return and other things.

As my friend drove on, still looking for his friend's new house (an apartment, really. All the craze in Korea here), I pondered as to what is wrong here. There's something that's not quite right, a disconnect that is not easy to rectify within a single phone call. Though I don't want to blare out my sister's achievements on loudspeaker here, I truly and honestly believe that she had done really, really well. She far surpassed me many times over if our high school results are put side by side to each other. She has many more As compared to my single, solitary top mark (though I got Bs in six other subjects. Six!). That one A is for Religious Education, a subject that compares and contrasts a lot of the major religions of the world (no analysis of the Jedi Church, though, to my personal disappointment). I remember a class bully who had become a fairly decent friend of mine, Daniel Bush, complaining about my grade after we received the results for the mock test. "But he's a Muslim," as if that was any excuse, "it's not fair that he got top marks because that's his religion." Until this day that never fails to bring a smile to my face; I must have done rather well on the questions about Christianity and the major religions' opinion on euthanasia as well, Mr Bush. (I called him Bush baby once. He wasn't best pleased, and proceeded to physically show me what he thought about that).

I remember, still, the hard work that I had put in for that particular exam, but I also remember the relief and satisfaction that came afterwards. You appreciate things more, however slightly, when the circumstances and situation seem to work against you. The personal sense of satisfaction and achievement is all the better for it, and in that light, things are viewed in a more positive light. That's the problem with grading everyone with a single approach, I suppose. It provides the effects, but it doesn't explain the cause, doesn't explain the context that surround the text. I can still remember Dr Pat Goon explaining during my Monash days that the text is also a form of context, and vice-versa.

I liked Dr Pat very much. I never got around to calling her Dr Goon, but we share a common love for the Lord of the Rings. She is a complete geek when it comes to sci-fi stuff, and some were the times when I would merely pop my head round her office and she would greet me with a character's name. "Remember me?" "Yes, Faramir." I wonder if she still remembers me to this day, but I'd walk away all the happier at being called Boromir's younger sibling.

I remember these moments more than the grades that I received from her. Obviously, it wasn't all that great to begin with, and that may well explain the lack of instantaneous recollection of my own grades that I had metaphorically moved mountains for before. It's always in the moment that you fail to look up and realise...that at the end of the day, you'll do the exam, you give it your best shot, and whatever happens...happens.

I do not see it around me, though. I do not see many other people seeing the paper qualifications for exactly what they are: paper qualifications. The knowledge garnered along the way is important, but at the end of the day, everything can be simplified into you, the student, paying a lot of money that probably belongs to your parent, for a single piece of paper to set you off into the world. Once again, we see only the effect, rather than the cause. The context, ever so important in grounding the achievement within a particular set of framework, is missing. I do not know of any of my friends who received their diploma and say out loud, "Wow, this is so totally worth the RM70,000 my daddy paid for it."

What is that, then? What is the disconnect that casually tosses away the context that is required in order to gain a set of perspective on these things? Why do people still get upset that they do not get straight As? They get only five, only six, only seven As, and they'd still be feeling down, still be murmuring on the phone. Never mind that international phone calls are freakin' expensive (another context there), but someone doing 5 or 6 or 7 times better than me still feel that perhaps, just maybe, the end of the world is not far off.

Could it be a fault of the society that we live in? The pressure to do well on academic terms have never been higher. It is even more so in Korea, where there is the extra pressure for students to have a good grasp of English. Recent surveys revealed that many people worry that they are losing their jobs due to the recent downturn in the economy; more tellingly, many people believe that their English (or lack of fluency in) will make them first in line to be fired. In Malaysia, the culture of after school tuition, of outperforming others, of getting all As is incredibly high. We, as a society, continue to encourage this. We, as a society, perhaps no longer remember what it's like to be a student. I still feel close enough to my learning days in university (my current programme excepted) that I feel I am able to recall the hardship, but also gain a certain amount of perspective that comes from the distance.

I keep up to date with the happenings in Malaysia via the online news portals. One newspaper released the results of the top achieving students for the SPM examinations. These students will inevitably be feted with all sorts of rewards and scholarships that comes with the territory of having their names splashed across the printed journals of the day. In Korea, high school students can even get discounts at some of the shops they frequent if they get good marks.

Have we forgotten what happened to Subashini?

Do we care about the disconnect between text and context, increasingly unrealistic expectations and pretty good reality as it is? Is this where we, as a society, as human beings, want to be?

I just don't know where 'here' is, where we all are, and whether it's the place where we really, really want to be at.