Writings on the Wall 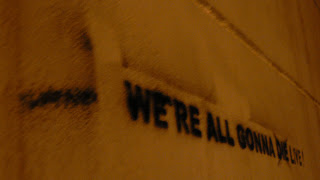 I looked around the room, taking in the history of it all. It is a relatively small dormitory room, though it is slightly bigger than the one I had in Korea. There, four guys would share their lives and laughs together for four years. Here, my little sister wouldn't quite share it with other guys, and it wouldn't quite be for four years either, but she'll be here long enough to have left her mark.

Not that she's the only one, for it appears that others have beat her to it. “Hey, Little One, check this out,” I motioned towards the wall against which her bed is lined up. Words, some legible, some not, can be made out, though I have to admit that I've seen better handwritings. These are not merely the act of dogs marking their territory, as school kids of my generation are wont to do. We used to do it everywhere, writing down on walls and doors statements like “Jason woz 'ere 98.” I got into the act myself once, and wrote down something along the same line in my Maths classroom. My teacher, a red-haired woman whose love for the colour purple cannot be underestimated, wouldn't have noticed. Or so I thought, for lo and behold, a week later, the words were no more. “What happened here,” I quietly thought to myself, and then checked again to make sure that it was the same spot along the same wall. Evidently, Mrs Ward noticed me turning my head here and there, and promptly announced to me that my efforts would be fruitless. “I had it cleaned up, Fikri,” she said, before further admonishing me in front of the class. “What a stupid idea, to leave scribblings like that on the wall. I don't understand why kids would do it...” I was still a little perplexed, and so in a moment that would rival my time in Standard 2, when I proudly proclaimed that a cat has two legs and two arms, asked probably one of the most stupidest questions of my life: “How did you know it was me, Miss?” She blinked in disbelief. “Well, there's not that many Fikris about, is there?!”

Had I been born a Jason or David like every white boy, I might have gotten away with it.

Alas, it is with some regret that I inform you that the scribblings on my sister's room's walls are nothing of the sort. In fact, I reckon some effort was made not to identify themselves, but to provide little notes of encouragements. “Come on, you won't regret the effort later on!” “Work hard, play hard, pray hard!” “Pay the price now, and enjoy later!” “Finals will be over soon!” These are the words that the students have written as something of a pep talk, to provide the final push required over the finishing line. I find it interesting, however, that the words are structured not just for themselves, but it is also relevant for the newcomers to take some heart from.

“This is pretty cool,” I said to my little sister, turning to look at her as I did so. She was busy rearranging her own items, cleaning every bit of surface clean of dust and other unwanted particles. She merely nodded, gave me a silent agreement, before continuing along her task. My other sister, on the other hand, didn't really do much, but then again, I suppose that she had pulled her weight before I got there. Across the room, another young girl, a newbie, was also doing the same thing, and an elderly woman (most probably her own mother) sat quietly, casting a watchful eye over her efforts.

I had spent a lot of time with my little sister when she was younger. She had been born in what I consider to be my best year, 1992, a year during which I attained my highest academic achievements to date (2nd overall in Standard 2, 1st placed student in Bahasa Malaysia), and it may well remain that way, for I have grown to realise the true value of such academic achievements. Nonetheless, 1992 was also the year we moved to a new house in Setiawangsa. It was a year of new beginnings and bright starts to bright futures. It was also the year she was born in, and truth be told, I had wanted a little brother. You know, boys will be boys in that way. The same could be said for girls as well.

Over the years, we would spend a lot of time together. That's a given; she's my little sister, after all. However, there was a point when I slowly realised that the time I had with her would not last forever. She wouldn't be a little girl, a little princess until the end of time. She'll grow up, there'll be other guys who will come and take her heart (and break them once in a while, perhaps). She won't be laughing at my jokes for long, and neither will she truly enjoy playing around with her teddies with me. I used to always (and still do) 'control' her 'children', imbuing each and every one of them with voices, characters and personalities. It became our thing, something me and my siblings continue to this very day (so if you do happen to come across us talking in tongues, accents and weird voices, don't be freaked out and wonder whether it's got something to do with my mother being a psychiatrist, there's a perfectly logical explanation for it all :) ). From that moment on, I tried harder and harder to spend more time with her, tucking her in every night, reading and making up stories whenever the time called for it (ask her why tom yam is actually from Holland...). Half the time, she couldn't tell whether I was telling the truth, but she'd enjoy it nonetheless. Once in a while, it gets out of hand, and she does piss me off sometimes, but the reverse is also true. We're siblings, after all; who else would you fight with otherwise?

Now, however, that time has pretty much ended. Now, she has grown into a beautiful, smart and fine young woman, a young lady about to take her first tentative steps into the bigger and wider world, away from the confines of home living. She's no longer my little girl, my little princess, and I have to say, that makes me feel so sad. Me being away for years and years didn't help (though it does help to make the time that we did spend together that bit more precious), and not living together for the years that I wasn't away nailed the coffin firmly shut. She'll go on to prove why she'll be the best of us, the best of my siblings, why the strength hidden within her will come to the fore, a strength that she had fostered through difficult times, and will stand her in good stead. She doesn't see all of this, of course, but I do. I see it.

I have seen my little sister grow up into a young woman who will leave her own scribbles on the walls of the world. We never will go back to where we were before, but she has this whole new world at her feet.

I suppose this is what bittersweet is.