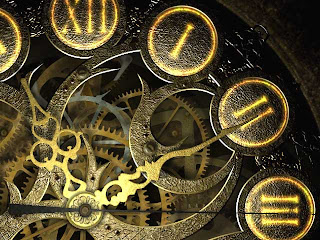 It was a long, long hour.

I am in the computer room, trying my damnest to log in. However, I couldn't, I suspect, because of the flood of people from all over the country who are also trying to log in. It is frustrating, and somewhat nerve-wrecking. It's the proverbial minutes and hours eating away at you, and in this case...the digestion, is really, really slow.

My blood begins to boil. I hear to clock, hung on the plain, unimaginative wall, ticking its tock away. Tick, tock, tick, tock. It teases me, prodding me with the invisible hands of time. Ha ha, it says, you can't get it. You will not get it. And even when you do, it's going to read a big, huge negative that will cost you more of your life.

I shut my eyes, concentrating on the computer at hand. I had opened up three other computers, and all three of them had failed to log in. There's a minor jam going on here, all I need to do is to calm down, relax...breathe...

...but I can't. The mere act of closing my eyes makes my own mind run wild. I imagine my friend popping her head in as she passes, and enquiring without any clue as to what I'm doing there at that early time. I would tell her that I'm checking for my results. She would ask me why I'm not checking with my laptop. I'd say that my laptop is not working at that moment. She would ask me why it is not working...at which moment in time I will probably completely lose it and tell her to fuck off.

Except that I wouldn't, because there is no one there. All mere figments of my imagination, but one that is powerful enough for a lasting impression to live on, even if it did last a few moments more than its virtual brethren.

There's nothing and no one here except for me, looking at the screen again, waiting for the indicator at the bottom of Internet Explorer. Internet fucking Explorer. Part of the bane of my existence here; Koreans use mainly Internet Explorer as their weapon of choice. Korean companies design their websites with this browser in mind, meaning that half the time, many Korean websites wouldn't properly load on Mozilla Firefox (or any of the other [superior] alternatives like Chrome or Opera). What a bunch of idiots. Don't they know how weak IE is in the face of Firefox? Had it been a real fire fox, IE wouldn't stand a chance of even getting to the extinguisher...

...no, no. That's not me talking, that's the frustration. The frustration driven by this country, this society, the exams, the results, the hypocrisy and complexity of its make-up, the clock ticking on the...

I turn to look at it. It is now a mere five minutes after I had last checked. How slowly did the time pass. How slowly is this killing me.

The air conditioner hums noisily in the background. I furrow my eyebrows in slight confusion; had it been so for the past hour? I noticed it not, my mind wasn't on it. But now it is, and now it...is. It distracts me, along with the ticking tocker, double-teaming on me in a handicap match of attrition. The submission match of a lifetime at Wrestlemania. It comes at me in full flow, a clothesline that knocks me flying before the referee had even started the match. They say that wrestling is fake. I say it's not real, but in that moment, as I lay on the mat with my teeth knocked out, I couldn't really tell the difference. I struggle to get up...