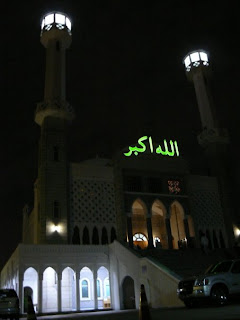 The world is sweet in the heart, and green to the eye; and verily God hath brought you, after those that went before you: then look to your actions and abstain from the world and its wickedness.

It was a collection of sayings by Nabi Muhammad, collected by

I have a tendency to pick up little things here and there. I especially love leaflets and booklets. These are the things that I always have a wonderment of. Every since I was young, I have always been excited by books. They're not just words lumped together for profit (though I've no doubt that's not untrue either), but a lot of them are little worlds that I could escape into, mini-fantasies that live out my dreams. Beyond the escapism, though, lies a power that could influence the way you think and feel.

On one level, that's a good way of describing the book I am talking about.

Consider this saying by the prophet: “Ye followers of Muhammad, I swear by God, there is not anything which God so abhors, as adultery.” Consider that, and consider the number of times a Muslim husband has strayed. Consider also the number of polygamous couples within and without Malaysia. While the system is not in itself bad (though the reasons for it extends beyond war), the people, the Muslims who have abused it and the trust of their loved ones, leaves a bad taste in the mouth. Consistently, Muslims are encouraged by the Prophet to consider women to be on the same level: “Women are the twin-halves of men.” Yet there is a lot of discrepancy between what probably should be, and what actually is.

It might be possible to claim that these are rather vague, and could be interpreted in a number of different ways. Having said that, they are not just wishy-washy wishes and dreams of a better future, but can also be rather specific: “Happy is the Mu'min, for, if good befalleth him, he praiseth and thanketh God; and, if misfortune, praiseth and beareth it patiently; therefore a Mu'min is rewarded for every good he doth, even for his raising a morsel of food to the mouth of his wife.”

Then again, cultural evolutions cannot be disregarded. Over time, nothing truly remains static. Rather, however powerful an idea may be, they also take on the characteristics of the environment it lives in, the place it comes from. Applying every single thing wholesale may be practical at the time, but perhaps some of these should be looked at in a more detached way. How accurately, anyway, can we attribute these to the great man himself? Thus, we should always look at any one thing with a pinch of salt, because that any one thing is not just one single thing. There are many factors that comes into play.

“No, not all Muslims are terrorists,” I have repeated many times to my friends. “It is a reflection of the situations that people find themselves in as well. It's not just a matter of religion. As much as I may not like it, religion becomes a tool, a medium, an outlet for people to express their anger.” This is an argument that I have told many of my non-Muslim friends, especially Christians, and especially Korean Christians. Now that I come to think of it, at the risk of further exacerbating stereotypes, I find it interesting why not many Sikhs, Hindus, Buddhists or even Jews have approached me in the same manner.

“You must make a film to make people understand the world,” my friend had said. He's a member of a church that I go to once in a while, strolling in halfway through their sermon, before fraternising with my friends afterwards. “You must think of a way in which the violence must end. You must educate Muslims about the world.” It makes me laugh when I think of that. Ironic, isn't it? The member of a church who sends missionaries to Cambodia because they feel sorry for them that they are poor, and believe that they are poor because they are not Christians, that they do not believe in the Lord Jesus Christ...telling me that I should educate Muslims about the world. I'm all for respecting other people's beliefs, but when that belief impinges upon the beliefs of others, I begin to question the boundaries of my responsibilities.

For it is the boundaries that has somehow led us this far down this road of not-quite-knowing-where-we-are. Where are we right now? What kind of world do we live in when we do not acknowledge the worlds of our own neighbours? I suppose in a way, such extremities may be designed to counter the perceived extremity of the other, but where does that leave us? And what is the role that we should, perhaps must play in this matter.

I raise this, because somehow we have fallen far from where we started. This is my observation (myself included). I write of the hadiths of Nabi Muhammad (S.A.W.) because it makes me realise, in a way, of the fact that a lot of people are not actually who they are. I mean, I know, for sure, that there's plenty of people of that ilk, but to realise is something different. They claim to be Muslims, Christians, or whatever, but they are not. Despite having spent a lot of time studying it, I still do not know enough about these religions, but I do know of Jesus's teachings, and one of them is one I actually try to adopt for myself: “Do unto others as you would have them do unto you.” Undoubtedly, the wording may not be entirely correct (cultural evolutions, remember), but nevertheless, it is something that could do with a little more practice in day-to-day life.

For it is when such practices are stopped, when such actions are not done sincerely, that many problems arise. “Feed the hungry and visit the sick, and free the captive, if he be unjustly confined. Assist any person oppressed, whether Muslim or non-Muslim,” said the Prophet. Justice is a big concept in Islam, arguably one of its most important, and I suspect (I do not know for sure) that it is these ideals that are played upon when inciting hatred and manipulating feelings to one's own ends. It is these ideas that made me reconsider my ideas of what I should or should not be responsible for. What is oppression? Who is an oppressor? What counts as justice?

What I see, on a day-to-day basis, in Malaysia, England, and Korea, is not justice. Certainly not in the way that I think justice should be defined, anyway. I see, read, hear and feel a lot of people who are corrupt, untrustworthy, and deceitful. “All actions are judged by the motives prompting them.” “The holder of a monopoly is a sinner and offender.” “It is unworthy of a Mu'min to injure people's reputations; and it is unworthy to curse any one; and it is unworthy to abuse any one; and it is unworthy of a Mu'min to talk vainly.” “That person is not a perfect Muslim who eateth his fill, and leaveth his neighbours hungry.” “Give the labourer his wage before his perspiration be dry.”

How many people who call themselves Muslims can nod their head comfortably and say, “Yup, I did that last night”? I know I can't. I know that there are even people who can't look at themselves in the mirror because of the defects, of the wrong, of the things that they shouldn't have done. “Some people build up a mental fortitude, a mental strength, that they have to hold on to,” my mother once told me. She is a psychiatrist, and I had been bitching about the hypocrisy of people in face of some adversity. “That's why they say and do the things that they do. They know that without this, they would crumble and fall into a deep depression, or worse.”

So what's the right thing to do, then? Is there a single right thing to be upheld as an ideal to begin with? There is a lack of humility in realising that perhaps, in a world populated by so many other people, people who hold on to different beliefs, different forms of comfort, different forms of ideals and principles, that perhaps our one way is not the exact right way for every single person. I can definitely stand to learn more on that front. Being in the profession of making films makes this even more of a problem. As a director, my way is the right way. My word is final. But how right is that? How right can I be even half the time?

I would only know by doing. I would only know by reading, by writing, by making. “To spend more time in learning is better than spending more time in praying; the support of religion is abstinence. It is better to teach knowledge one hour in the night than to pray the whole night.” “Acquire knowledge. It enableth its possessor to distinguish right from wrong; it lighteth the way to Heaven; it is our friend in the desert, our society in solitude, our companion when friendless; it guideth us to happiness; it sustaineth us in misery; it is an ornament amongst friends, and an armour against enemies.”

I suppose when it comes down to it, perhaps religion is not what it should be after all. It is not a matter of Muslims terrorising others, or Christians taking Haitian children illegally, or any of that sort. It's just a bunch of idiots running around using God and godliness as a mask.

We're all human beings; perhaps it is time to look at each other more in such light.

And it might just take a small book, along with an open heart and mind, to shine that light.

And behold! a bier passed by Muhammad, and he stood up; and it was said to him, “This is the bier of a Jew.” He said, “Was it not the holder of a soul, from which we should take example and fear?”

*Excerpts taken from 'The Sayings of Muhammad' by Allama Sir Abdullah al-Mamun al-Suhrawardi, with a forward by Mahatma Ghandi.