The Raptor made its way past them, over their head, and beyond. It disappeared into the distance, unlike the deep throbbing that Lee felt within his heart. No, his chest. His chest.

It was much bigger than that.

“So what about you?” Kara's voice brought him back to reality. He turned, and saw her still standing there, looking tired, dishelved...complete. Like there is nothing else for her to do. Her eyes, sunken, betrayed the trauma that she had gone through. The same trauma that he had also gone through, that everyone else within the Colonies had endured. It was, without a doubt, a long and weary four years; now the journey is over.

“What are you gonna do?” she continued. “Today is the first day of the rest of your life, Lee.”

Lee thought about it, gave it some time, and then a little smile. Quick, momentary, as a flash, but there if you look for it. “I always thought when this is all done, I would, uhm...” the words fail him for a moment, “...kick back, relax, spend the rest of my days doing the absolute minimum as humanly possible.”

“And now that you're here?”

That is a good question, he thought to himself. Now that he is here, what will he do? How will it change things? The years spent running from the Cylons had also drained him. In that time, he had become pilot, CAG, commander, soldier, president, lawyer, friend, partner, son...human being. It wasn't humanly possible that the end of all that could be achieved, despite all the hoohas that has been spouted by everyone else, it seems. They're never going to find Earth, he thought. The Cylons would come back, surely. This is it, this is going to be the last one, he remembered thinking when the battle with Pegasus was about to commence. Even if all of it were to end the next day, though he wanted to rest, he couldn't, for he couldn't be sure, couldn't believe, truly, that lasting peace would be seen in his lifetime. Earth, the real Earth, the new one...seemed like a dream that would always and forever remain only and exactly that.

But now that he's here?

“I want to explore,” Lee found himself saying, almost to his surprise. Then he let go, gave in to the moment, and felt himself smile. “I want to climb the mountains, I want to cross the oceans, I wanna...Gods, I can't believe I'm saying this, it sounds so exhausting,” he exclaimed, turning to look at Kara. “I must be craz...”

He swallowed his own saliva, a soundless process that nevertheless felt like it could be heard by anyone who was nearby. No, the answer was already given. It was given when she came back from the dead, when she found the coordinates for Earth, when she kissed him on the beach at New Caprica, when she...when...

The strong winds, cool, calming, soothed him as he fought back the tears, realising how blessed he had been.

“Goodbye, Kara,” he whispered. “You won't be forgotten.” 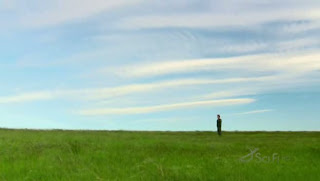 *Read 'The Forgotten'.
**A re-imagined scene from 'Battlestar Galactica'.