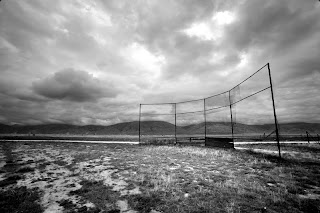 She put down the shot glass, giggling as she did so. Lee looked at her with amusement, but one could say disdain was hiding itself somewhere within that. The smile, unconscious, was a given; Kara was well and truly drunk.

At least it would appear to be so. Her eyes weren't particularly red. Cold, perhaps. Blue, certainly. But red? The tell tale signs of a person, a woman, who had lost control, lost charge of her own will? No.

For if there is one thing that Kara could never be accused of, it is of losing control of her own will. Even in the short time that Lee has known her, the hours that they have spent previously eating and drinking, that much was obvious.

“Hmm...” came the slow reply, drawn out in a guttural manner. “If I have a fate, then it is set. I ain't thinking about it, and I ain't gonna make it happen any sooner.” Pause, then another giggle, before she reached for the bottle once again. It nearly slipped from her grasp, but Lee, ever the gentleman, helped her on her way.

“OK, fair enough,” he said as he did so, “but flying...when you're thinking about dying...it's a bad way of doing business. You're gonna get scared and you're gonna start second guessing yourself!”

It knocked the wind from him; this time the bottle nearly slipped from his grasp. Fortunately, by then it was already safely in Kara's grasp. Not that she didn't notice; she giggled loudly, pulled it cleanly, if groggily, from Lee's hold, and waved her forefinger in the way a mother might admonish her child.

“You said that you think about dying every time you get into a cockpit,” Lee said, pushing on and gamely ignoring her finger. He couldn't, however, miss her nodding her head, and neither did the change in her eyes go unnoticed either. “Hmm...” was the only vocal reply. How else, then, to point out the obvious to any sane person of the incredulity of the statement? “Well,” he started, gesturing his arms widely as if that would bump some sense into Kara, and pumped as much exaggeration as he could into the situation, “hello!”

“Yeah, but...it doesn't scare me,” she started. Her eyes almost closed, her eyelids flickered momentarily, “like...that's what you don't get.”

Lee cocked his head sideways, quizzically. There's something here, something missing, that...no, it's not quite missing, it's there, right in front of him. The answer is right there, and yet...

“What, so...it's, uhm...Kara Thrace, fearless warrior,” he allowed himself a smile at the thought of Kara half-dressed as Wonder Woman. “Right?”

This she smiled at, probably at the same thought, as the alcohol kicked in. Even a short giggle, a quick burst of femininity that reminded Lee that beneath the tough veneer of fighter pilot, Kara is still a girl, a woman, a human being. A complex one, like everyone else passing by on the street, like you and me.

A brief moment of connectivity does not make for a fair understanding, but what they have here is not a brief moment. It is not but a second, an infinity that plays back and forth, in the past, the present, and the now.

Kara is human, and now, the shields are cracking. Lee gave it some thought, considered rubbing his jaw almost as if to make a point of doing so, but decided against that. Not that it meant his next words weren't carefully chosen or delivered.

Her fingers trailed the rim of the shot glass. The bottle, grabbed earlier, were not poured of its contents, their earlier intentions all gone long ago the minute they became deeper with each other, the minute that Kara decided to say that, for once, it's OK. It's OK to open up and let go of the worries and the troubles, to all that she have held on to.

She looked up, into his eyes, and let go.

*A reimagined scene from 'Battlestar Galactica'.