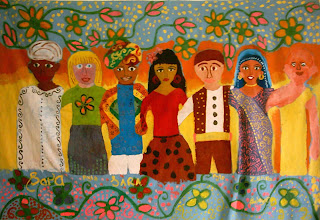 I recently attended a conference that looked at the multicultural aspects of certain societies and films from that society. The day before that, a couple of films, namely Amir Muhammad's 'The Last Communist' and 'Gubra' by Yasmin Ahmad, were screened for the general public. I didn't quite manage to make it for the screenings, however. "Have you seen it before, though?" asked Amir after the conference. "I managed half of it, I think," I replied, recalling some years back in an NGO office when I helped out on an orang asli documentary/propaganda video.

The conference itself was rather interesting, because we managed to take a quick look (and I do mean quick) at the multicultural aspects of Malaysia, as well as how multicultural Korea actually is. There are, of course, some really simple answers that comes out of this. Korea is about as monoculture as monoculture can get within the modern world, while Malaysia practically lives on the messy, fucked-up, multi-level mixing of various cultures that grew out of half a century's worth of (inter)national evolution.

Of course, the truth must be said: when it comes to issues such as this, there is no such simple answers.

"I would like to know your opinions on how important you think the media, and in particular films, are when it comes to validating how multicultural a society or a nation is," I directed the first of my question to the panel of filmmakers and activists. They had all finished doing their respective speeches (the Korean feminist got on my nerves, though, with her simple branding of South-East Asian women in Korea, but more on this later); now the very short time has come for the grilling. "People look at films from Malaysia, and say, 'Wow, it's multicultural,' so I'd like to know the panel's viewpoints on this issue. Secondly, can we truly use such films or songs or media as a barometer of truth? After all, for the most part, they remain largely fictional endeavours."

I thought it was a fair enough question, one that allowed enough leeway for them to interpret it without being particularly messy. Instead, half of them got mixed up and thought I was talking about multicultural films ("Yes, it's important to have such films."). Amir got close enough, and gave a suitable reply: "I think that ultimately, on some level, the films we make will always reflect a part of us. Any film that has an audience cannot exist in a vacuum." In other words, Malaysian films tend to be multicultural because Malaysia itself is multicultural.

Or is it? I feel that in describing what is multicultural, its somehow important to further define the term first. To me, at least, I go for the basic and simplest answer of all: of having influences of more than one culture. The question, then, becomes how multicultural a nation or a society is, rather than whether it is merely a multicultural one to begin with. We are, after all, living in times where such barriers are easier to cross, and so even a society like Korea's is somewhat multicultural to a certain extent.

That's not to say that Malaysians are multicultural by default. There must be a distinguishing mark that is made between a society and its people. The Malaysian society, as I have experienced it, is multicultural. For sure. I mean, there are not that many places around where you can have your racial and religious appetites whetted no matter where you come from. You like films? Take your pick from the Malaysian, Hollywood, Indian, Chinese, Hong Kong, and other regional offers on regular offer at the cineplexes. Same goes for your songs and what not; Rain probably sells more records than half of the locally-bred artistes. We have more cultural-related and religion-related holidays in Malaysia compared to Korea; after all, nobody gave a shit about the passing Eid-Mubarak here in Seoul. And they tell you Islam's the second biggest religion in the world, and make up a couple of percentiles of the total Korean population.

But the people? Malaysia has a multicultural society, but it does not directly mean that people are automatically open to other cultures and religions. I suppose it merely gives us a nice little context, an opportunity to grasped, to actually be truly multicultural. It gives us a chance to be fluent in several different languages, to truly respect the customs of others, without having to leave our own borders. We have the chance to interact with people who are not the same as us, people who have had different experiences and understandings when it comes to life. I find it to be an interesting notion; if America is a melting pot of cultures, then we're...well, just as melting a pot as America is, in that sense. It is, however, merely a chance. There's always room for improvement, room to be more understanding and tolerant of others, room that is not always filled with the proper action and/or intentions.

"Got no pork meh," said a friend's girlfriend as we searched for a restaurant early Saturday morning in downtown Ipoh. We settled on a Chinese restaurant, and I was deciding which of the food I'm actually allowed to eat. She had suggested something chicken-ish, I told her that it's probably not halal. That was when she said about the pork: "Can't eat the chicken? Why?" Some of us looked on in slight shock, as my friend quickly tried to explain to her. It was a small moment, but it was a moment that stayed with me even until now. A Malaysian who had lived in Malaysia for practically her whole life...and she doesn't know why I'm not supposed to eat non-halal meat. Given such a situation, it makes me wonder about others who may not know.

Hell, it makes me wonder whether I myself am missing something.

Thus, multiculturalism (or otherwise) is not something that should be assumed lightly. Korea, by the same notion, is heading in the right direction, in the sense that people also have chances to be multicultural in their own way. They do learn English in schools. Some even learn Hanja in their younger days. But how far do they take it? How many of such chances do they grasp? Perhaps, in a purely statistical context, Korea has less 'cultures' compared to Malaysia, but I don't feel that the cultures that they are exposed to have less currency. Nestled in between Japan and China, with a huge amount of American presence both militarily and otherwise, it cannot be said that Korea (and Koreans) does not have a chance to be multicultural. People laugh when I say this ("So, what...having McDonald's is a form of being multicultural?"), but that is still a cultural influence from without, however lowly that culture is thought of. In my opinion, on some level, it still counts.

I have often said that people here generally don't speak English well because they don't actually use or need it on a day-to-day basis. At the same time, I have met people (mostly of the younger generation) who speak English very well without ever having left the Korean peninsula. They practice it, carry it on from their high school days, learn it, bang it into their head. One of my actors in a previous film can speak basic Japanese; acting in Irwan's film, there was a scene when he needed to write Hanja. We all oohed and aahhed as he magically created the Hanja words that needed to be written down.

So how multicultural is Malaysia? How open is Korea to cultures different from its own? The general, simple answers are always dependent on the kind of images that people actually want to portray, which can always be positive or negative, depending on their agenda. It shouldn't be dependent on the kinds of films the society makes (because if you really want to be picky, I'd say there's a strong European influence in many of the top-line Korean films). It should be dependent on the people, on the definitions, on the opportunities and chances that people exploit and create for themselves.

Even if it is merely trying to properly read the McDonald's menu in English.