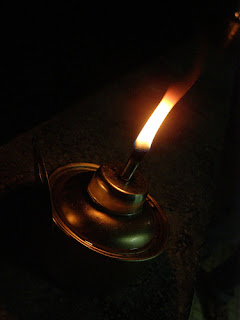 I look up from my camera. The wide, open, green/yellow spaces of the valley will have to wait for now. My producer, Won Jang, has found a house that may well suit the film I'm about to make. He beckons me over; in the not-so-far distance, my cinematographer, Tony, plays with his Leica. I curse silently, and walked with a slightly heavy heart. The house was great, but that wasn't the problem.

Early in the morning, 4, 5AM, perhaps. Some time in 2006. The sun has not yet reached its reach around the mountains in Jeonju. Korea is a very hilly/mountainous country. Even the most metropolitan of cities can't quite escape this face.

I huddle in, closely, looking once again at the script at hand. The headphones are pressed closely to my ears, Stan Bush's 'The Touch' blaring itself in loud in my ears, over and over again. It is somewhat inspirational. A friend has since noted that if I am obsessed with one thing, I will take it all the way to the other end of the world in terms of extremity. If I like a movie, I'd watch it again and again, finding out every single thing I could about the production, its cost, and download the script, analyse it, think of other potential actors/plots that could have been...

It's a song this time. 'The Touch'. A nice blast from the past, from my childhood. Once we are further away from it, we hold on to it, stronger, even as the invisible ropes becomes even more difficult to discern from the strains of reality. Childhood. Friendship. Family.

Damansara Jaya, 2007. I lay awake at night. Not that it was unusual, but it certainly was something not quite for the usual reason. I am quite the bat, if not the Batman himself. Dark, but not dark enough of a knight to take it all of the way.

My mind curses the split. It wasn't new, and no amount of cursing will reverse the hands of time, but it certainly made even the simplest of decisions slightly more difficult. Alternating is an alternative, but a decision, whichever way, has to be made. “You can't stay in KL,” was the firm answer from the both of them. “You have to be with family.”

Nevertheless, the decision, any decision that tips the balance one way or the other feels like some sort of trap, a trap that could inflame situations within further. North or south? Penang or Muar? Whichever it is, I have to make that decision soon.

Today, 2009. The wind bristles softly in itself, making itself known amongst the din of the Koreans enjoying the day out at the sea. Family day, it may well have been. I wonder whether they would all still be there at the beach come two weeks later; I want the character, Ji-sung, to be almost by himself, in a wide open space, filled with nothing but sand and sea and the clear sky at sunset.

In my mind, I had imagined the beach I stayed at in Terengganu. Lovely, sandy beaches by the dozen. At least, it seemed like it. Well-spread out, people barely seen, so take your bloody pick. I certainly did that time, but such choices are not open to me now.

Yet, somehow, it is to Terengganu that my mind drifts to. Well, not Terengganu specifically, but Penang and Muar. My mother should have been done with the prayers and the hosting by now. I was there a few years ago. The pesky kids from the neighbourhood, innocent and cheeky, would double back in a few hours time to try to make more duit raya from my mother. “I was preparing the water, then I turned around, and I thought, 'Hang on, I've seen your face before...'” my sister analogised the day's events on the phone later that day. How I miss her.

“...Way',” Tony finishes. He was explaining something about a particular scene in 'Carlito's Way' by Brian DePalma. I honestly couldn't recall whether I had indeed seen it, and so asked for a brief description of the said scene. As I did so, my sight and gaze wonders and wanders slightly, though I never lost attention of what he was saying. I read some time ago that Sir Alex Ferguson had the same thing, thinking about one thing and concentrating on another. So if you're reading this, don't worry, Tony. I heard you.

The phone rings. “SELAMAT HARI RAYA!” comes a somewhat familiar voice. A female voice, cute, beautiful, incredibly pleasant to the ears. I imagine a most beautiful and attractive young lady smiling at the other end of the line. However, I couldn't recall knowing a beautiful and attractive young lady fluent in Malay who has a Seoul phone number. “Err, who's this?” was the feeble reply. She tells me, then I smile.

Jeonju, 2006. I put on my songkok, applying the finishing touch to the traditional outfit I had usually worn during Raya. I look smart, even handsome, somewhat. If I am going to go scouting for locations today, I'm going to do so wearing my baju melayu.

It is the dark blue baju melayu that had stood the test of time. My parents had somewhat insisted on buying new raya clothes every year. I never saw the real need to do so, but gave in regardless at least every two years or so. Looking back, perhaps it was some sort of responsibility, some sort of sign, that they were trying to be good parents. To show that I lacked for nothing, least not of clothes, food, shelter, and love.

Such a big word. As is Raya. Big word. Big occasion. For families. A time to be with families. “Imagine working on Christmas/Juseok,” I was tempted to throw back at times. “Imagine coming home not to your family. Imagine having to make that choice.”

This year, I am grateful for the friends that I have made. For today, for my film, I am grateful for working with people I trust with arguably the most important story of my career so far. Others are in far more sympathetic situations that me.

However, it does not, cannot, and will not replace the gaping hole in my heart every year I spend Raya away from my family. Even if I do have to make the same choice every year.

As I spend another year away from all of you during Raya, overcome with the guilt of the separation that comes as a result of chasing my dreams and pursuing the opportunities I've been lucky enough to have...nothing replaces us. Nothing replaces all of you, of spending time with all of you on Hari Raya, of bowing and shaking all of your hands in reverence and asking for forgiveness every year for all the sins I have done. As I grow older, I find myself becoming more and more sad at the passing of such moments, for I know that those moments now live on only in memories of yesteryears.

Despite all of this, know that I love you, all of you, very, very much. I miss all of you dearly, and find it difficult to hold back the tears as I write this. What I would give to wake up in Setiawangsa, in Muar, in Penang, in all of your arms, and be with all of you on this day today.