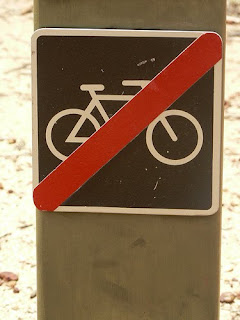 *This is a true account from one of my film buddies, chi too. I am reposting it here from Facebook, warts and all, because I think it's a tale worth knowing.

dear friends and friends of friends,
as some of you were aware, me and my bicycle were denied entry into the LRT today. allow me to just tell this chronologically in point form

830AM as usual, i tried to get on the LRT in taman maluri, strangely this time, the security guard was very swift in denying me entry, when i asked why, they said policy and if the counter staff say yes, then he'll let me in. obviously the counter staff said no. i explained that i've been doing this for the past year (initially there were some resistance, but eventually it was allowed) and its been fine, they suddenly denied knowledge that they can recall seeing me with my bike ever.
I tried calling the LRT hotline but no one picked up due to it being a public holiday today. I then asked a friend who is public transport advocate who i can call about this and he gave me rapidKL's communication GM (hereon referred to as the 'comms guy')
I called the comms guy and he said he was absolutely unaware that foldable bicycles are allowed in. He offered a solution and said I should be let in but to wait until he deals with it with operations. he offered to let me in this time and then issue me a letter that would allow me to bring my bike in in the future if i flash it to security and counter staff... i thought it was absurd
10 minutes later, the counter staff told me that i can bring it in this time but not anymore. realizing that if i were to comply would mean that i would agree to not allow myself in anymore. That is unacceptable, so i refused to enter. Since my morning was wasted and will bound to be a waste, i decided that I should just sit in front of the turnstiles in protest of the situation.

930AM Realizing how pointless this is, I've decided that I should move this to Masjid Jamek. I cycled to Masjid Jamek and made a placard along the way.

1000AM As i descend into Masjid Jamek LRT, the security guard who saw me from afar strangely waved 'no' with his hands to me. At this point, it already seems like there must have been a recent memo to all LRT staff reinforcing the 'no bicycle' rule. I then proceeded to park myself and my bicycle in front of the turnstiles there and unfurled a placard that says 'ENTRY DENIED: RapidKL says no to sustainable green transport!'. A polis bantuan immediately approached me, seeing that I am not doing anything wrong, I ignored him and continued with the sit in

1030AM 3 men and a woman approached me, none bearing any identity and all in plainclothes. The woman tried to talk to me, i explained the situation and refused to budge as i have no idea who these people are (i assumed that they are plainclothes cops). The men then went on to manhandle me and my bicycle. Fearing for my safety I locked myself and my bicycle in a fetal position. After about 30 seconds of struggling, they overpowered me and pinned me down with my arms and legs spread. At this point, I admitted defeat and shouted to them saying that I will get up myself and walk myself. They then took my bicycle and my bag and escorted me up, a polis bantuan followed after. At the top of the escalator, I was anticipating arrest but nothing happened, the men returned my belongings and left. I asked the polis bantuan who followed them 'dia orang ni siapa sebenarnya' to which he replied 'saya rasa diorang ni gangster', I asked him 'kalau gangster, bukannya kerja polis ke untuk melindungi orang awam dari gangster, kenapa tengok saja', he shrugged and left.

1040AM I called the comms guy and he was apparently outraged at what happened, he says he'll send the Operations Director to come see me and I should not be carried away with the incident... ironically, i did have a few men literally carry me away. A fellow friend who also cycles, soon joins me.

1130AM The Operations Director arrived and i told him what happened. He denied the association with the thugs and expressed surprised that i wasn't let in. He claimed that foldable bicycles are always allowed in and there must have been a misunderstanding. I requested for him to escort me to see the polis bantuan that was in charge and to perhaps view the CCTV recordings of what happened. We went to see the polis bantuan and he insisted that I intended to stage a protest which I acknowledged, I then questioned him for not taking action if he thinks its a bunch of thugs... he was still very keen to accuse me of wanting to create trouble...seeing how futile this is, i committed his nametag and ID number to memory. I then went off to lunch as I was really tired, thirsty and hungry

1300PM I proceeded to make a police report of all that have happened at the Dang Wangi police station for the purpose of formalizing the documentation of the event. The report was recorded and the officer referred me to an investigating officer in Dang Wangi IPD If I want to take this further.

I am now contemplating if I should take this further and report to the IO. I'm thinking not as I don't think they'll give a rat's ass and all I wanted was to have a formal documentation of all that has happened. I'm still thinking what I should do next, but I'm really tired now.

I need to tend my farmville now