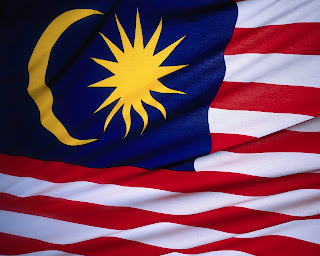 Recently, on the 31st of August, Malaysia celebrated its 52nd Independence Day, commonly known as Merdeka in the Malay language. The number of years attached to this is, to this day, somewhat disputed in some quarters, given that Malaysia in its current form did not exist until the year 1963. That particular year saw Singapore, Sarawak, British North Borneo and the Federation of Malaya come together on the 16th of September to form the country now known as Malaysia. Of course, things have changed from that point on, but the dates of August 31st and September 16th have become important milestones in the country's history, at any rate.

Not surprisingly, the celebrations this year are somewhat muted. Many of the celebrations back home were canceled, largely due to the outbreak of the A(H1N1) virus that is still to be effectively contained. However, my point of this particular post is to contend the issue of some Malaysians who refuse to celebrate it for reasons of dissatisfactions with the current administration. Many decided to wear black as a sign of protest; though I know not of the numbers this year, last year a fair number of people decided to promote the idea of flying the Malaysian flag upside down as a way to signal that the country is in distress.

In writing this, I am not in any way saying that the reasons for such actions are not unfounded. In fact, in large parts, I myself find that there is a lot that is incredibly questionable in how the country is being run on a day to day basis. It seems that almost every week, as I clicked on the news sites back home (a habit I find myself doing almost everyday; I may be far, but Malaysia and its matters remain somewhat close at heart), there is always something distressing going on back home. Racially-charged by-elections, political aides dying under mysterious circumstances, rallies being the flavour of the month(s), forcible evictions of people from lands, public money being dwindled down the drain...all these and a lot more makes me feel incredibly distressed, and, at times, angry.

Many a time I have pondered about the possible and practical solutions that could be done in order to bridge the gap between people and improve understanding of one another's culture. I have spent time both within and without the education institutes studying aspects of the various religions and cultures of the world. In fact, I find that it is as important a part of my job/would-be-job as a filmmaker. Filmmaking is about telling stories, and stories invariably reflect the life/lives that the film is being made in, one way or another. Whether what is portrayed on-screen is actually a part of the filmmaker's own point of view is probably another story (pun intended), but invariably we can always deduce the filmmaker's not only understanding but also respect of the environment of the story. In other words, I feel that a great storyteller must somehow be able to absorb and reflect, to a certain extent, the social context that he is in. In doing this, I find myself being more drawn towards the great number of similarities rather than differences between people. There will always be something different, I suppose, between a Malay and Chinese of any kind, but going beyond the issue of race, we would see that there is a bigger race commonly known to all as the human race. We share the same fears, the same hopes for the future, the same aspirations for the present, the same needs for the day.

Ultimately, then, having had a grand total of 52 years to govern ourselves, I find myself somewhat disheartened that such issues are not only existent, but also actively and subtly encouraged by others for devious means. The solutions are many, and the solutions are of various practical levels, but here is the most practical part that I somehow feel people sometimes forget.

That we are independent.

We are not free from the chains of tyranny that still rules the roost to this very day. That is very clear. In fact, it is a little to clear for comfort. We do not have as big a freedom for speech, expression, and public gathering as we would like. That is the most unfortunate of circumstances to be in, but one reason, the main reason, why I feel that we should still celebrate Merdeka the way it should be and always have been celebrated is that we are free from the control of others outside of the country. We depend, of course, on others for support, economically or otherwise. But we are free to make our own decisions. The leaders we have are the ones who are from Malaysia, who have been picked by the system that we have in Malaysia. I find that people often do not place as much importance in the fact Malaya, before its granted freedom in the late 50s, was ruled by foreign forces for the longest of times. For over half a millenia our lands were controlled at various times by the Portuguese, the Dutch, the Japanese, and the British. The rule in the land was officially changed five times, meaning that we were practically conquered five times. I always have a difficulty thinking of another country who were a big a colonial slut as we were. The resources, people, intellect, land, machinery and ingenuity, for better or worse, were always for the benefit of others who came from outside of the country.

Thus, I have always felt that it is this particular chain of tyranny and control that we should celebrate breaking. When we became independent for the first time, it was the first time we were free to make our own choices in 500 years or so.

As it stands, a lot of things do not appear to be very bright at this moment in time. It's not to say that everything is doom and gloom in the country. Far from it; in comparison to a lot of countries, we are actually pretty lucky in many respects (and I include England and Korea in this comparison). It's just that it is fair to say that we have not fulfilled our potential to the best of our abilities. Perhaps in some ways, that in itself is a gross understatement.

But we are free. Let's put it in another way, one that that the anarchists would probably delight in hearing. If we are not at all happy, the leaders who are responsible for driving us into this situation to begin with are all holed up in Putrajaya. That's practically an hour away from the heart of the Malaysian capital, give or take traffic conditions. If you want to do something about it, you don't have to go all the way to England to protest (unless you're trying to sue the British government and the Queen, that is). The freedom to do something about it is there if we want to take it.

At least on some level, I think that is a freedom worth celebrating.

*Film for the Day: 'The Diving Bell and the Butterfly' by Julian Schnabel.