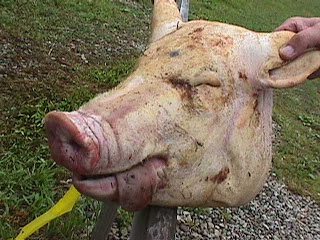 It was with some shock as I read of the news of a protest in Malaysia, which seems to be the 'in' thing for people back home. For those not in the know (though if you do keep a keen eye on Malaysian news this would not have escaped your attention), last week a sizeable number of Muslims finished their Friday prayers and made their way to the Selangor state secretariat building, in order to make their feelings known about a proposed Hindu temple building in Shah Alam, Selangor.

The main bone of contention, it seems, is that the area earmarked for the temple is claimed to be a Malay/Muslim-majority area, with a fair number of people from other races/religions also calling the area 'home'. That's all fair and well; people should be free to voice out their opinions, without having to apply for permits to conduct such activities.

However, the one appalling thing about this is the use of a cow head to hammer home the point. I find this absolutely horrendous, and not just because the cow head is an animal that is sacred to the Hindus (again, for those not in the know). It is an absolutely vile act, one that really elevates this to something that is really, really scary.

I will not be repeating the pros and cons of this particular event, as it has been analysed to the death on other sites. Yes, it is extreme. No, the organisers claim not to know who actually brought the head to the party. Yes, it shows that the Malays will defend their livelihood to the last drop of their blood. No, the temple building is not practical, since it was "too close" to a playground. Yes, the people could be charged under the Sedition Act. No, the smart people of the country will not be swayed by this event. Yes, it is brought by the brother of an Umno man. No, we Muslims would not like it if people bring pig's heads to protest the building of a mosque. Yes, the Home Minister is an idiot for trying to justify such an action.

No,beyond and above all of this, though, is a more personal, more private misgiving about the whole affair. For the longest time, I have tried to explain to people why I don't eat non-halal food. "What is halal food?" they ask. Well, I begin, in short, halal means allowed, and it means that an animal has been sacrificed in a proper way. As a Muslim, we believe that all of God's creations are only and exactly that: God's creation. He created them, and in that respect, we all belong to him. This would apply to animals as well, meaning that while they don't have a sign that says "Property of God: Do Not TAKE!" it's equally unwise to take merely kill animals just like that. As human beings, though, we eat what we eat to survive, an act that includes the killing of animals. Halal, therefore, partly means that we try to do that as humanely as possible.

"But other non-Muslim countries/methods also try to kill animals in a humane way," my friends would retort. True, I say, but we also say a prayer, basically telling God that we kill this not for fun, but for life and its survival. It doesn't, of course, mean that other religions don't respect animals, but by and large, that is the basic principle of halal-ness. It's something I personally believe in, and while it is not completely without holes ("What about sea animals?"), it's a pretty attractive principle by itself. Certainly, it is one that I have oft-repeated time and time again over however many years of explaining why I cannot eat that oh-so-nice-looking barbeque on offer (or to people who think the only thing Muslims can't eat is pork).

Until now. The cow head protest, as it has since been known, has become a political football, a religious issue, a racial point, a...whatever else you want to call it. It is not attractive in any way, but the one that kills it for me is to see how the cow had been treated. It was severed, stepped on, spat on, and generally pissed upon by people I would have called fellow members of the ummah (brotherhood). It was absolutely disgusting to see a creature of God decried in such a way, and I cannot begin to fathom or even imagine the evil that lurks in the minds of those who thought it up. Even if it wasn't planned on by the organisers, I didn't see anyone stepping forward to say, "Hang on mate, something's not right here." The organisers of the protest may have had noble intentions, but at the same time, they also allowed for a creature of God to be humiliated and descrated in such a horrible way. Perhaps that is coming from someone who has been rooming with two Hindu friends for over a year; perhaps it is the look on the cow's face as it was 'paraded' as something that hammers home a political point or two. Did it know of the fate that would have fallen upon it?

I also suspect that, while this issue is far more complex than I would like to cover here, and that the sins of man is between God and themselves, these people (I can't even really call them fellow Muslims) will have a hard time explaining themselves to the Almighty later on.

*Cowbei is a swear word in Mandarin, apparently. At least, that's what a Taiwanese friend of mine always (and I do mean always) say... :)

*And speaking of Taiwan, Film for the Day: 'Cape No. 7' by Wei Te-Sheng