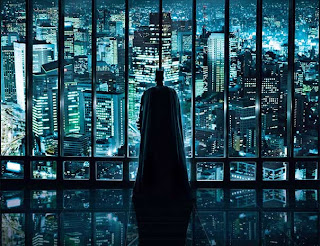 Endure.
What was it Alfred had said about enduring?
He leaned forward slightly, stopped only by the pain in his back. His muscles screamed with pain, a reminder that no matter what he thinks, he is only limited by his humanity.
Humanity.
Is that why his heart is hurt so?
He leaned back, and closed his eyes. He concentrated, focused...hard, on his own body. There's a broken toe somewhere on his right foot. He wasn't sure; his right leg felt almost totally numb from fatigue. The suit, its rubber stretched slightly by the constant exertions, singed with the burns from the explosion.

Explosions? There's no way there was only one; the flames were high and tall, as angry as a tiger roused from its sleep.
Explosions.

Of course there was more than one.
His heart burned, now with the realisation that there was definitely more than one explosion.
The one that killed Rachel...
His eyes opened in shock. His breathing, heavy, became laboured, but...no. No.
Endure.
He closed his eyes once again. Shutting it tight, holding back the tears. He could almost feel the eyelashes bumping against each other, top and bottom. He balled his fists, breathing in laboured breathes, but...slowly...slowly...endure.
He opened his eyes, this time of his own volition, and stood up. In one, single movement, he walked towards the windows, and looked out towards the city. His city.
His father had built the city up. His family had done so, ploughing their money into an endless cesspool of crime, of hatred, of greed and corruption. He gave no less an effort, albeit in a slightly different direction.
"I've prepared a little breakfast."
Alfred had came in, unnoticed, but not unwelcomed. The old man had practically become his father over the years, replacing a father made real only by the memories that became more vague, more distant. In the past.
But memories are not real. Memories are the mere abstract of that which had already happened, something which could be manipulated, twisted, and changed into one's own accord. Memories...
...memories are the one causing the pain.
"Alfred?" he started, unsure. Hesitant. Not to talk to Alfred, but to...articulate the hurt. The pain. The loss. His body is screaming for rest, for a moment of break from all of that, but his heart, though crushed, is still in one piece, and begging for an outlet, any outpouring of emotions that would let it...
...let it endure.
"Did I bring this on her?" Pause. He closed his eyes, and opened them again. This time, he didn't see the city, but his own reflection. He saw his face, a small cut above his right brow. The blood had dried, but the wound remained open.
Harvey wasn't so lucky.
"I was meant to inspire good," he continued. His voice, though hoarse, is noticeably stronger in conviction. "Not...madness. Not...death."
"You have inspired good," Alfred replied with equal conviction. "But you spat in the faces of Gotham's criminals. Didn't you think there might be some casualties? Things were always gonna get worse before they got better."
"But Rachel, Alfred..."
"Rachel believed in what you stood for," Alfred cut him off. "What we stand for." A momentary pause; he believed Alfred added it deliberately for dramatic effect. He did like his Shakespeare, the old Etonian. "Gotham needs you."
"No." Now his voice became stronger. He felt as if an invisible hand had gripped his heart... "Gotham needs its true hero...." the grip tightened "...and I let that murdering psychopath blow him half to hell."
"Which is why, for now, they're gonna have to make do with you."
Bruce couldn't help but smile, on the inside. The grip subsided...slightly. Momentarily. The moment passed too soon for comfort. "She was gonna wait for me, Alfred. Dent doesn't know."
He shifted his gaze slightly, looking at Alfred's reflection. Indirect, but it was there; for the first time in the conversation, their gaze met and locked. Then Alfred took something from the tray, and slipped it into his pocket. "What's that?" Bruce's curiosity was aroused.
"It can wait," was Alfred's reply as he put the tray of breakfast down on the table (he had been holding it the whole time). He turned sharply, almost on his heels, and started to walk away.
"That bandit in the forest in Burma," it came suddenly, the immediacy of Bruce's voice even catching his own surprise. "Did you catch him?"
"Yes."
"How?"
Alfred didn't turn to look at him, but Bruce could nonetheless imagine the old man's face scrunching in consideration, figuring out, even in the short moments before he answered, the best way to put it. He could, however, see Alfred's body let out a sigh; he had given up. The best way to put the answer is the only way it can be put.
"We burned the forest down."
Alfred walked out of the rooms, his steps metronomically echoing loudly across the empty hallways. It has always been so.
And now, no matter how much he would endure...it will remain empty that way.
Forever more.

*A re-imagination of a scene from 'The Dark Knight'.