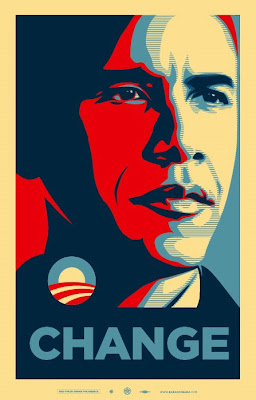 "The words have been spoken during rising tides of prosperity and the still waters of peace. Yet, every so often the oath is taken amidst gathering clouds and raging storms. At these moments, America has carried on not simply because of the skill or vision of those in high office, but because We the People have remained faithful to the ideals of our forbearers, and true to our founding documents."

I left my laptop running, as it downloaded the files of work I was supposed to be doing. Yes, I am on holiday of sorts, but the sad creature that I am, I find it to be strangely therapeutic.

"Today I say to you that the challenges we face are real, they are serious and they are many. They will not be met easily or in a short span of time. But know this America: They will be met."

I turned on the TV, flicking straight to CNN. The battery in the Astro remote control pad was weak, and I cursed it as I pressed down on the button harder, wondering if I had somehow missed it.

"It has not been the path for the faint-hearted, for those who prefer leisure over work, or seek only the pleasures of riches and fame."

I then wondered whether my dad would miss it. The door to his room locked, I decided to send him a quick message on the phone. I could hear the SMS alert tone beep from the inside of his room.

Moments later, he stepped out. "Has it started yet?"

"Rather, it has been the risk-takers, the doers, the makers of things -- some celebrated, but more often men and women obscure in their labour -- who have carried us up the long, rugged path towards prosperity and freedom."

"Look at how he speaks," my father mentioned. We're now holding our respective mugs of respective instant coffee mixes. Nobody in the house is boycotting anything, but the weapon of choice appears to be white coffee. As of late, it has become something of a common occurrence, analysing the newsmakers while drinking coffee.

"Now, there are some who question the scale of our ambitions, who suggest that our system cannot tolerate too many big plans. Their memories are short, for they have forgotten what this country has already done, what free men and women can achieve when imagination is joined to common purpose and necessity to courage."

I did as well. It was a well-timed speech, meaning to say that he spoke with enough gap in between his sentences to allow it to sink in. Halfway through, though, I realised that it wasn't something that happened by choice; rather, he was smartly allowing his voice to be heard by all on the delayed public announcement system.

"What the cynics fail to understand is that the ground has shifted beneath them, that the stale political arguments that have consumed us for so long, no longer apply."

It was interesting to note the pizazz of the whole ceremony. Grandstanding, showy, somewhat needlessly long...but incredibly detailed. President Obama became President at noon, for example, without having taken the oath yet.

"And so, to all other peoples and governments who are watching today, from the grandest capitals to the small village where my father was born: know that America is a friend of each nation and every man, woman and child who seeks a future of peace and dignity, and we are ready to lead once more."

Such details are interesting, somehow. Out of all of the fireworks, I don't know why, but the notion that someone, somewhere, came up with such detailed legislature for what may appear to be a straightforward ceremony is attractive to me.

"We are the keepers of this legacy, guided by these principles once more, we can meet those new threats that demand even greater effort, even greater cooperation and understanding between nations. We'll begin to responsibly leave Iraq to its people and forge a hard- earned peace in Afghanistan."

And then I started wondering why we couldn't do the same in Malaysia. No, we don't need Yo-yo Ma, but we do need a skilled, inspirational orator as one of the leaders in the country (if not the leader). I can't really say that my own leader (and the next one) has the ability to grab my attention. Does it say something that Barack Obama can? Is it a reflection of me, or a bigger reflection of him?

"We are a nation of Christians and Muslims, Jews and Hindus, and nonbelievers. We are shaped by every language and culture, drawn from every end of this Earth."

The handover, the transition, has, for the most part, been extremely gracious, extremely well-handled, extremely...civil. Contrast that to the outgoing Barisan Nasional state governments who got kicked out of their respective states, leaving behind them a trail of shredded papers.

"And because we have tasted the bitter swill of civil war and segregation and emerged from that dark chapter stronger and more united, we cannot help but believe that the old hatreds shall someday pass; that the lines of tribe shall soon dissolve; that as the world grows smaller, our common humanity shall reveal itself; and that America must play its role in ushering in a new era of peace."

"See how he controls his body," my father pointed out again. "He looks left, he looks right."

"Yeah," I agreed. "It looks good. I wonder how he deals with using only one teleprompter."

"To the Muslim world, we seek a new way forward, based on mutual interest and mutual respect. To those leaders around the globe who seek to sow conflict or blame their society's ills on the West, know that your people will judge you on what you can build, not what you destroy."

A lot has been said that this particular speech isn't particularly inspiring. I wouldn't necessarily disagree. After all, it is hard to top his actual victory speech late last year. Nevertheless, while it may not be the one we deserve, it is the one that we need (yes, I'm quoting Batman here). But here is the one point that made my hair stand a bit.

"To those who cling to power through corruption and deceit and the silencing of dissent, know that you are on the wrong side of history, but that we will extend a hand if you are willing to unclench your fist."

Ooh, unclench your fist. A nice little message, ensuring that he pretty much covered all the bases. The international and the domestic...

"As we consider the road that unfolds before us, we remember with humble gratitude those brave Americans who, at this very hour, patrol far-off deserts and distant mountains. They have something to tell us, just as the fallen heroes who lie in Arlington whisper through the ages."

"Our challenges may be new, the instruments with which we meet them may be new, but those values upon which our success depends, honesty and hard work, courage and fair play, tolerance and curiosity, loyalty and patriotism -- these things are old. These things are true. They have been the quiet force of progress throughout our history."

...the public, and the personal.

"This is the meaning of our liberty and our creed, why men and women and children of every race and every faith can join in celebration across this magnificent mall. And why a man whose father less than 60 years ago might not have been served at a local restaurant can now stand before you to take a most sacred oath."

"America, in the face of our common dangers, in this winter of our hardship, let us remember these timeless words; with hope and virtue, let us brave once more the icy currents, and endure what storms may come; let it be said by our children's children that when we were tested we refused to let this journey end, that we did not turn back nor did we falter; and with eyes fixed on the horizon and God's grace upon us, we carried forth that great gift of freedom and delivered it safely to future generations. Thank you. God bless you."

"OK, that was pretty good," said my father, rising up. "See you tomorrow. Goodnight."

"And God bless the United States of America."