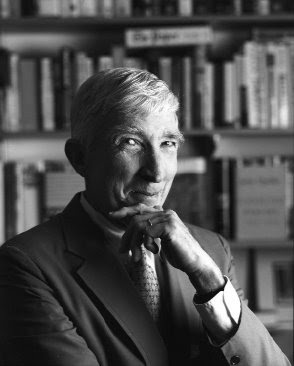 The news of John Updike's passing hit me hard a few days ago. I didn't cry, or even came close to actually shedding a tear. Nevertheless, I felt a tug at my heart, a moment of shock, one that dissipated as time itself took over to drive my motions forward, to move me on from that moment.

Nevertheless, certain sense of loss remained. I will not claim to have read all of his books, for such a claim would have been baseless and frivolous. If anything, my father fits this bill a lot closer than I do. Predictably, then, if you put together the two and the two in your head, you'll have the answer: it was my father who picked up 'On The Farm' from the bargain stack of books available for a low price (I think it was less than RM8) at Carrefour all those years ago. It wasn't particularly thick, and scattered as it were amongst the rest of the books, it was almost inconspicuous. My own personal selection of the time had been John Wyndham's 'The Kraken Waves' (though I personally prefer 'The Day of The Triffids').

"This is a good book," my father said, handing it over to me once he was done with it. "You should read it." Read it I did, and blown away I was. Rarely have I come across an author who expressed such visuals and emotions in the most inconspicuous of things. He gave such personification to the environment, making them come alive with such clarity and power that it moved me.

Even now, years later, I still remember well a particular sentence from the book: "It was true - whenever I returned, after no matter how great a gap of time, to this land, the acres flowed outward from me like a form of boasting." Granted, it wasn't the most bombastic of sentences, but I felt touched by it. The reasons, I can't quite articulate at this point of time, or any other, but ever since that time, I have tried to incorporate it into my own, personal writing. If Matthew Stover, a prominent science-fiction novelist, influence the substance of my writing, so John Updike guided me in its style. My most successful script (in the sense that it actually got me my first trophy in my career, even if it was for third place) is 'At Rainbow's End', and I channeled all the Updike I could into that.

His influence, of course, is far more reaching than this particular episode. He was, after all, one of the most influential writers of the past century. Nevertheless, this is my own little piece, adding to the cacophony of tributes by others.

Credit where its due, and its due.

Anonymous said…
I am waiting to read your opinion about our politic situation in Malaysia now especially after incident happen in Perak.Tq
2:30 AM