An interesting anecdote I came across online about the leader of the opposition party, PAS.

Nik Aziz, the Menteri Besar of Kelantan, too prays five times a day and many times in between. But he will switch off the lights when he prays because his prayers have nothing to do with matters of state. So he does not want the rakyat to pay the cost of his prayers. The electricity consumed during those few minutes he prays is cheaper than the cost of a cigarette. Nevertheless, it is still the rakyat's money so the lights must be switched off.

The Kelantan police are in a dilemma. Menteris Besar and Chief Ministers need to be escorted by a retinue of police outriders and bodyguards. Even Khairy Jamaluddin is flying around in a helicopter while campaigning in Rembau. And Khairy is just the son-in-law of the Prime Minister and holds no government post. But still he is surrounded by 50 Mat Rempit who will not allow anyone close lest their boss gets in harm's way. Nik Aziz, however, refuses a police escort because it will be the rakyat that pays for it. At times, he walks around the kampong all alone, unescorted.

“You can't do this,” lamented the Kelantan Police Chief. “You are endangering yourself. Someone might harm you.”

Nik Aziz just laughs it off and replies, “Who would want to kill an old man like me? What would they gain?” 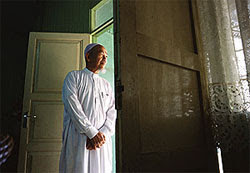