"Meow," it purred softly as I stepped outside the door. I look in the direction of 'it', hidden somewhere in the darkness. 'It', of course, is a cat, or more specifically, my next door neighbour's cat.

My neighbour's cat has a tendency to visit us. Most of these visits were spent unconsciously, at least on his part. Many were the times when I'd look under my car before starting, making sure that it's not taking its cat nap underneath it. Even more were the times when it rests silently underneath the patio bench, its head slightly bent against its paws, one on top of the other.

"Meow," it beckoned me in the darkness. I went in closer, squatting down slightly in front of it. "Meow yourself," I said, stroking its head. He shut his eyes, clearly enjoying the attention.

"How come you're still here, little guy?" I asked him. "You don't like going home?" It purred its answer, an apparent negative given the above evidence.

Later, talking to my friend about it, I told her that the cat reminded me of Alang, my grandmother's cat. Seeing Alang used to be one of the highlights whenever I visit my grandma at her home. There would be a few others, but Alang, with its black and grey stripes, would somehow always get more of my attention than the others.

And then one day he wasn't there anymore. He had gone away, and never came back.

"Pets do that," said a friend of mine when I told her of the cat later that night. "They run away just before they die, because they don't want to die in front of their owners.

Looking back, I wonder whether my neighbour's cat has any such intentions.

But it can't die. 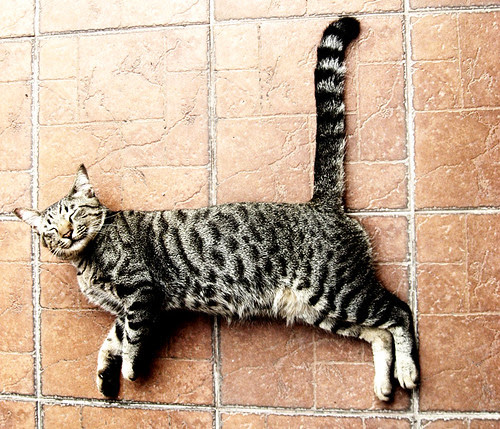